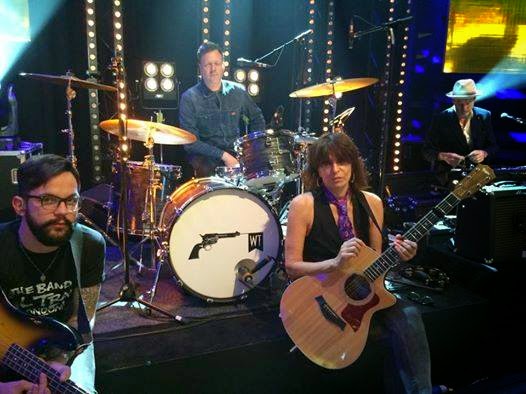 First, a reminder that local indie rockers Magatha Trysty will be showcasing “Raygun” and other songs from their upcoming CD tomorrow night at The House Of Blues. I was impressed when I first saw them at International Pop Overthrow - Chicago a few ago, and they’ve since evolved into first-rate recording artists. Magatha Trysty’s full-length debut Your Clothes Will Wear Themselves came in at Number 4 on my Top Releases Of 2012 Countdown. Vocalist-guitarist Christopher David, who fronts the group with his wife, vocalist-keyboards player Catherine Louise, has told me their new effort will be even better, and it that represents a big leap forward. So this should be an interesting evening.

Chrissie Hynde has been getting favorable reviews for her solo debut Stockholm and she’ll share a double bill with Blondie on September 16th at this year’s iTunes Festival in London. The iconic singer-guitarist just announced the dates for her USA Tour, which includes November 12th at the Chicago Theatre, as well as shows in San Francisco, Boston, New York, Washington, D.C., San Diego, Detroit, and Philadelphia. Fans can register for a chance to purchase tickets for the show in their town early via a post on Hynde’s Facebook page.

As I mentioned in my earlier review of Stockholm, which Hynde recorded with guitarist Bjorn Yttling from Peter, Bjorn and John producing and helping out with the songwriting, the album features Hynde breaking new ground while still playing to her strengths. Newer songs like the guitar-driven “Dark Sunglasses,” and the bristling “A Plan Too Far” should work well alongside songs from The Pretenders in a live setting.
Posted by Terry Flamm at 10:37 PM