Brown Bagging With Brehmer And A Bowie Band 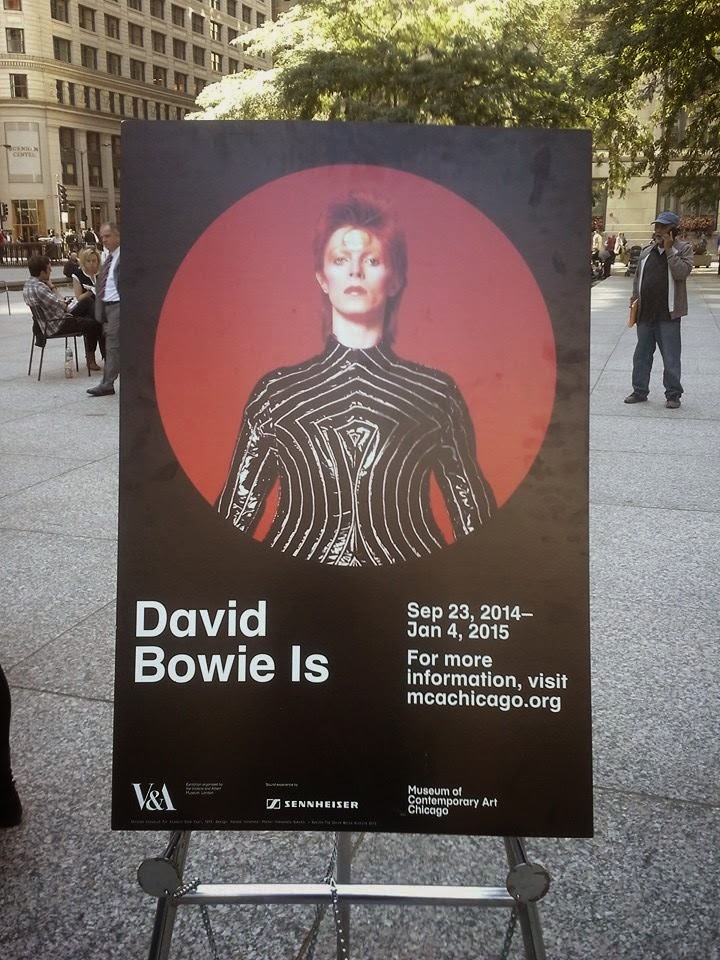 Cities often sponsor public celebrations when one of their sports teams wins a championship, so why not throw a party for a cultural coup? You could call David Bowie Day a pep rally for the artsy set, but Chicagoans should be proud that our Museum Of Contemporary Art is the one place in the United States that is getting a visit from David Bowie Is, a multimedia exhibition involving art, music, fashion, and performance. Held from noon to almost 1:00 PM this afternoon at the Daley Center, David Bowie Day was a great opportunity to have lunch outside in perfect Fall weather, flash some civic pride, and hear a live band pay tribute to the Thin White Duke.

I arrived around 11:00 AM, unsure of how much of a crowd would turn out for this event. Daley Plaza was pretty much empty at that time except for a WXRT tent where the station’s friendly minions were giving away David Bowie Is postcards and small black ‘David’ (with a lightning bolt for the ‘i’) buttons. Across the street, just outside the building where the local CBS outlet does its news reports, there was an official promotion for the network’s new NCIS: New Orleans TV show. In Daley Plaza, there was also a Voter Registration Drive taking place.

Contrary to what some sources had predicted, Mayor Rahm Emanuel did not appear at today’s David Bowie Day event. WXRT’s popular air personality Lin Brehmer, a guy who knows partying like Eric Clapton knows guitar strumming, served as MC and sported an Aladdin Sane lighting bolt across his countenance. He introduced the people from the Museum Of Contemporary Art who were responsible for snagging David Bowie Is and joined them in promoting that event as well as David Bowie Day.

Brehmer also introduced the tribute band Sons Of The Silent Age. Opening with the song “Sons Of The Silent Age” from Bowie’s Heroes album, the group executed a short but highly polished set that included “Changes,” “Fame,” “Ashes To Ashes,” “Life On Mars,” “Under Pressure,” Suffragette City,” and “Heroes.” Lead vocalist Chris Connelly was once again the essence of cool, and various band members joined him on harmonies. For a review of a full Sons Of The Silent Age concert, check out July 2, 2013 in the BHT archives.

Also, be sure to visit Robert Loerzel’s Underground Bee blog for some great pics of the David Bowie Is exhibition.
Posted by Terry Flamm at 10:22 PM