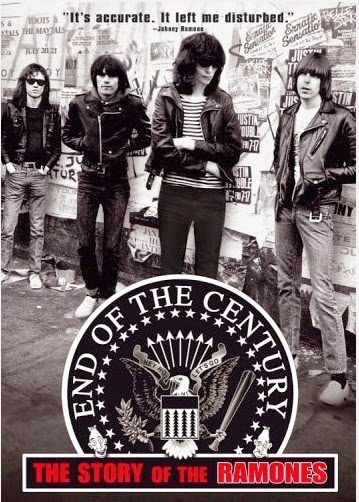 EXPO CHGO, The International Exposition Of Contemporary And Modern Art opened today on Navy Pier and runs through Sunday. Over 140 galleries from various countries are involved, and in addition to all that art, there will be panel discussions and lectures. Admission is $20.00.

The British Invasion Tour, featuring Chad And Jeremy, Mike Pender from The Searchers, Terry Sylvester from The Hollies, Denny Laine from The Moody Blues and Wings, and Billy J. Kramer, will have additional guests for tonight’s show at the Saban Theatre in Los Angeles. Peter Asher of Peter And Gordon will be joining in, and John Wicks from The Records will be singing “Hearts In Her Eyes” in a duet with Pender.

Relive The End Of The Century. City Winery in Chicago will be screening the music documentary End Of The Century: The Story Of The Ramones at 8:00 PM next Wednesday, September 24th. Tickets are $5.00, the doors open at 6:00 PM

The youthful bluegrass trio Sleepy Man Banjo Boys will donate the proceeds from the digital sales of their original tune “Man In Your Corner” to the Epilepsy Foundation. Group members Tommy, Robbie, and Jonny wrote it in honor of their younger brother Sam, who is coping with epilepsy. The Sleepy Man Banjo Boys will be part of the National Walk For Epilepsy in Washington, D.C. on April 15th, 2015.

Chicago will flaunt the honor of being the only stop in the United States for David Bowie Is by throwing a David Bowie Day celebration in Daley Plaza on September 23rd, the same day the exhibition opens at the Museum Of Contemporary Art - Chicago. The free lunchtime event, which is being presented by the MCA and radio station WXRT, will include a live performance by the impressive Bowie tribute band, Sons Of The Silent Age.

The six-woman Celtic group Cherish The Ladies will bring its annual and always festive Christmas concert to The Old Town School Of Folk Music on December 4th.

The Old Town School Of Folk Music’s September through December 2014 Concerts brochure arrived in the mail this week, heralding a number of worthwhile events. Some of the highlights for October are folk veterans Bonnie Koloc and Ed Holstein on October 3rd; rock and roll satirist Todd Snider with guest Elizabeth Cook on October 9th; An Evening Of Paul McCartney Featuring Phil Angotti, Steve Dawson, Casey McDonough, Carolyn Engelmann and Tommi Zender on October 11th; and fiercely independent folk/rock star Ani DiFranco and vocalist-violinist Jenny Scheinman in A Benefit For The Old Town School Of Folk Music on October 15th

Dum Dum Girls have posted a short video on Facebook promoting a current tour in support of their latest CD Too True, which they’ll be performing from start to finish. They have a rendezvous with Chicago at Metro on October 24th. Tickets are now on sale.

Chicago indie rock group Fort Frances is heading up to the Great North Sound Society studio in Maine, where they’ll start work on songs like “Building A Wall” and “Wrong Man” for their next record. Sam Kassirer will be producing.

Great God in heaven, you know they’ve been around awhile. The Ides Of March have lined up some special guests for their 50th Anniversary Show next Saturday, September 27th at the College Of Dupage. The event is being hosted by veteran radio/TV personalities Dick Biondi and Bob Sirott, and the vocalists will be Jim Peterik of The Ides Of March, Tom Doody from The Cryan Shames, Carl Giamaresse from The Buckinghams, Jimy Sohns from The Shadows Of Knight, and Ronnie Rice from The New Colony Six.
Autographed copies of Louise Harrison’s new book My Kid Brother’s Band AKA The Beatles are available through the Liverpool Legends official website.  Louise Harrison, older sister of George,  manages the Beatles tribute band.

Buy your tickets now before all of good ones are taken. Tickets are on sale for the Ian Hunter And The Rant Band show at Park West on November 14th. Judging from the recently released Live In The UK 2010, which Hunter recorded with The Rant Band and a string quartet, he’ll be doing a mix of solo material like “All Of The Good Ones Are Taken” as well as hits from his Mott The Hoople days. Hunter released the new album himself, and it’s available directly from his official website.
Posted by Terry Flamm at 11:33 PM