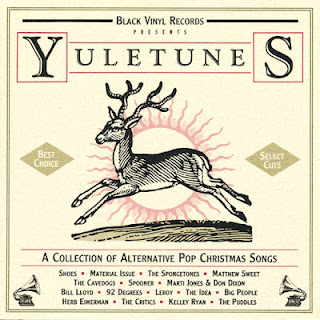 Best Holiday Wishes to all my readers at Broken Hearted Toy.

Here’s a review I’ve done in three separate posts in past, but decided to run together in an edited form this year.

NOTE: If you’re looking for a new power pop compilation, check out Song For Sandy Hook Vol. 2. 100% of the profits go to help the Danbury Hospital in Coinnecticutt. Thanks to Herb Eimerman for sharing the link on Facebook.

Released in 1991 on Shoes’ Black Vinyl label, Yuletunes was an ambitious collection of original Christmas songs created by various power pop artists, mostly from the Midwest. Matthew Sweet, who contributed the reverent “Baby Jesus,” and Marti Jones and Don Dixon, who created a joyous duet on “Every Day Will Be Like A Holiday,” were the biggest names involved.

“This Christmas” by Shoes is a catchy rock song with a monster drum beat and chiming guitars, as the band’s lush harmony vocals deliver the optimistic advice, “Things will get better./Doesn’t seem like it now, but they always do.” Material Issue’s “Merry Christmas Will Do” features Jim Ellison’s rugged guitar playing, and as a vocalist, he’s a master at selling the pain of unrequited love. “You don’t have to say you love me, I know that that’s not true,” Ellison concedes. “But Merry Christmas will do.” The Idea, fronted by vocalist-guitarist Phil Angotti, contribute the fetching “It’s About That Time,” which describes winter scenes, church bell, carols, and watching It’s A Wonderful Life. It goes on to note that the holiday season seems like the only time of the year when “we all have a lot of love to share.”

The single-named Leroy checks in with “Santa Stole My Baby,” a mid-tempo song that sets up a crime scene with clever clues like, “footsteps on the rooftop.” The slinky guitar playing underscores the sexy fun of lyrics like, “She makes him cookies./She calls him Chris./Gets everything double on her Christmas list.” “The Saddest Time Of The Year” comes from Spooner, the Wisconsin-based band that included lead vocalist-guitarist Duke Erikson and drummer Butch Vig long before they formed Garbage with dynamic Scottish chanteuse, Shirley Manson. The haunting arrangement, and Erikson’s guitar playing in particular, make this reflection on disappointment and loneliness at Christmas even more touching. The Cavedogs mixed comedy with catchy pop music on “3 Wise Men And A Baby (Xmas Song),” a funny and ambitious epic that begins with a sound bite of Burl Ives’ talking snowman from Rudolph The Red-Nosed Reindeer. About halfway through, the guitar-driven song abruptly shifts into a lounge act reminiscent of the bit Bill Murray used to do on Saturday Night Live.

Kelly Ryan is inconsolable on the ballad, “It’s Not Christmas,” as she spends the holiday alone “for the first time in years.” It’s not clear why her longtime beau is no longer there, but a reference to her looking longingly at the phone suggests there’s hope for a reconciliation. Singer-guitarist Herb Eimerman’s gorgeous ballad “You Gave Me” celebrates family traditions at Christmas, as well as the way love and values are passed on from one generation to another. The lyrics take listeners to a holiday gathering at the parents’ home where children and grandchildren bask in “the love from this fine house.” Eimerman tells his Mom and Dad, “I learned all my love from all your love you gave me.” The Critics uncork an irresistible energy on their romantic “She Feels Like Christmas Day.” It’s the one song on this memorable collection that could conceivably be played at any time of year.
Posted by Terry Flamm at 3:41 PM