Break Out The Heart-Shaped Balloons 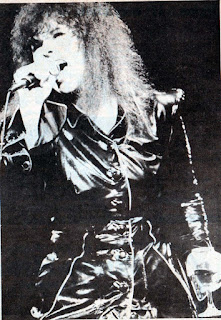 Photo of Ann Wilson by Roger Johnson for The Prairie Sun.

The Rock And Roll Hall Of Fame announced its 2013 Inductees earlier today, and I was happy to see that Heart was among them. The other artists being honored are Albert King, Randy Newman, Public Enemy, Rush, and Donna Summer. The induction ceremony will take place on April 18th, 2012 in Los Angeles. According to the official RRHF website, this will mark the first time the event will not take place on the organization's home turf of Cleveland.

I still recall how friendly and professional Ann Wilson was when I interviewed her and Howard Leese for a paper called Metro Entertainment Calendar backstage at the Alpine Valley venue in Wisconsin after a Heart concert in 1979. Leese was quite agreeable as well. Someone had brought in one of the red, heart-shaped Mylar balloons that vendors were selling. I think this type of balloon was fairly new back then, because Wilson seemed fascinated with it.

Years later, I read in Ann and Nancy Wilson's book, Kicking & Dreaming, about often they were turned off by banal and sexist coverage by the media. I’d like to think my article based our chat at Alpine Valley proved to be a shining exception, but that’s not quite the case. Metro Entertainment Calendar went under before my article could run, but our enterprising staff photographer, Roger Johnson, hooked me up with The Prairie Sun. I dug out my copy today and was dismayed to read lines like, “Ann and Nancy Wilson have got to be the dream girls of a thousand American men” and “’Crazy On You’ featured an acoustic guitar introduction by the lovely Nancy Wilson.”  What can I say, I was only 12. Or wrote like it.

But I did get some good quotes from Wilson, like this one about the balance of hard rock and more intimate ballads in Heart’s music. “I don’t want to be just in a boogie band or just a folk rock band. It’s more fun to be diverse. I hold The Beatles as my main idols. They always changed. They had a million faces.”

So congratulations to Ann and Nancy Wilson, the lovely Howard Leese, and the numerous musicians that have kept Heart beating all these years. The Rock And Roll Hall Of Fame induction is a well-deserved honor.
Posted by Terry Flamm at 11:53 PM