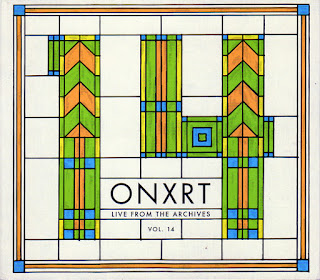 Arriving at the tail end of WXRT’s 40th year of broadcasting progressive/alternative rock, Live From The Archives Vol. 14 underscores the symbiotic relationship the Chicago station has with the artists it plays. It takes a fair amount of legal effort and benevolence on the part of musicians and their labels to put this charity CD together, which is why it’s only available in a limited quantity. Each of the 13 performances were broadcast exclusively by XRT over the past few years; more than half are from 2012.

As on past volumes of this series, the songs that were recorded at the radio station's studio sound the most unique. Who can forget the stellar “Senses Working Overtime/Grass/Love On A Farmboy’s Wages” medley from Vol. 1? “California” by Delta Spirit, “I Think I’m Paranoid” by Garbage, “What You Know” by Two Door Cinema Club, and “Parted Ways” by Heartless Bastards all have an intimate, acoustic vibe. “Simple Song” by The Shins is similar, although it was recorded at the Elbo Room. Delta Rae’s “Down By The River,”another in studio recording, mixes gospel vocals and a tribal beat.

There are also more energetic performances from XRT-sponsored concerts at venues around town. Arcade Fire’s “We Used To Wait,” Wilco’s “I Might,” and The Wallflowers’ “One Headlight” are all standout tracks. Proceeds from the sales of  Live From The Archives Vol. 14 help the Rock For Kids  and Sarah’s Circle charities. Better move fast if you want a copy. According to the station’s on air personalities, almost half the copies have already been sold in the first week.
Posted by Terry Flamm at 11:00 PM