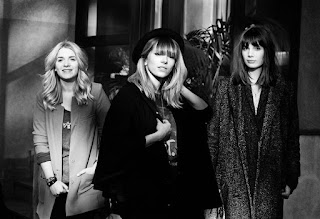 Over the years, several bands have fumbled an attempt to create a holiday message for their fans. Too often, they try to mimic the free-form approach pioneered by The Beatles, which results in annoying antics and cornball attempts at humor. So it's refreshing to find French garage rockers The Plastiscines come up with a short, fun clip that features them performing an acoustic version of "Santa Baby." The song has never been one of my favorites, but this version is charming. The clip can be seen on the band’s Facebook page.

Anyone who has seen the Beatles tribute band Liverpool perform at a Fest For Beatles Fans convention knows that Glen Burtnik is a talented musician and singer. He’ll be playing a Back To The 80s show at the Count Basie Theater in Red Bank, NY on December 22nd.

Magatha Trysty has filmed a video for “Want To Stay,” one of the many good songs from its full-length debut, Your Clothes Will Wear Themselves. The clip includes footage from the band’s show at The Abbey Pub.

Anyone who thinks Doctor Who has become too risqué since returning to the BBC for the 9th,10th and 11th generations might want to steer clear of Gorilla Tango Theatre in Chicago. Julia Borcherts reported in this past Wednesday’s issue of Redeye that group has a show called Don’t Blink: A ‘Dr. Who’ Burlesque planned for February through April. Various versions of The Doctor and his companions will be featured. And I'll bet those Weeping Angels could do a mean striptease.
Posted by Terry Flamm at 11:55 PM