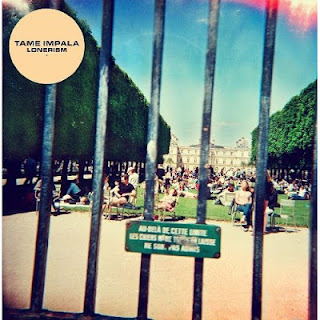 The music on Tame Impala’s second full-length release, Lonerism, sounds like it’s being beamed to Earth from another galaxy. The Australian group serves up a lush though unlikely blend of indie and prog rock that’s nearly irresistible. Kevin Par Coeur (or Parker, depending on which website you believe) plays guitar, bass, and drums, but it’s his multi-tracked vocals that give Tame Impala an ethereal elegance. Or, as the band’s Facebook page puts it, epiphany pop.

On “Mind Mischief,” Tame Impala adds gorgeous Beatles-inspired vocals over a space age soundscape, while the equally dreamy “Apocalypse Dreams” has a Motown backbeat. “Elephant,” a pulsating Pink Floyd/T-Rex romp is easily Lonerism’s most fun track. “Keep On Lying” and “Sun’s Coming Up” are intriguing songs that are eventually undone by too much studio gimmickry, and the disjointed opener, “Be Above It,” with its generic synth blasts, doesn’t fully convey the magic that follows.