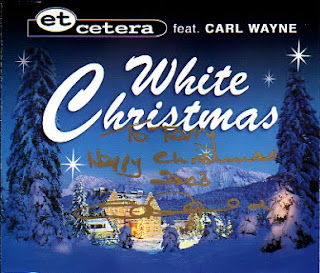 The Justice Collective’s version of  The Hollies “He Aint Heavy He’s My Brother,” a British charity single featuring Paul McCartney, Tony Hicks and Bobby Elliott of The Hollies, and several other well-known musicians, is now available for pre-order from Amazon.

Here’s a Post From Christmas Past, featuring another member of The Hollies.

In 2003, Wayne collaborated with the German synth due et cetera on a CD with three versions of the classic holiday song, “White Christmas.” The disc was made available through Wayne’s website, and fans could choose between an English language version or a German language version. The singer autographed each copy with a gold ink pen. The “True Feelings Mix” and the “Radio Mix” have slower, keyboards-based arrangements that showcase Wayne’s deep, soulful vocals. They’re nice, but perhaps a little too mainstream for a power pop fan’s taste. The “Swing Mix,” which features horns, finds Wayne taking a more peppy approach, and it’s a lot of fun.
Posted by Terry Flamm at 11:40 PM