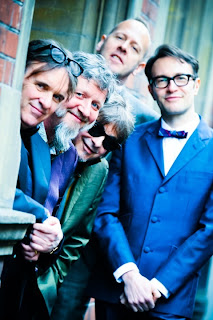 First, a few words of congratulations to Phil Angotti, Eric Howell, Phil Levin, and Dann Morr for their appearance on WGN News this afternoon. The four musicians, performing under the name, The Why, played “Pleasant Valley Sunday” by The Monkees and “Handle With Care” by The Traveling Wilburys in order to promote the Third Annual Concert For Carlos being held this Saturday at Uncle Fatty’s in Lincoln Park. The event is a tribute to the late Carlos Hernandez Gomez, a respected local TV reporter as well as a musician and avid Beatles fan. There’s a $20 cover, and the benefit kicks off at 7:00 PM.  For more info, check out the Carlos Hernandez Gomez Tribute Concert And Fundraiser page on Facebook.

A few weeks back when I wrote a preview of The B-52’s and Squeeze’s July 6th concert in Chicago for the Illinois Entertainer, I mentioned that Chris Difford and Glenn Tilbrook were working on songs for a new Squeeze CD. I didn’t speculate on whether the concert would include any of them, because there was no mention of it on the band’s website. Now I can report that Squeeze is indeed introducing new material on this tour, and the songs are worthy of Difford and Tilbrook’s well-earned reputation.

Not only that, but fans can buy a copy of the four-song Arse About Face 2012 Demos CD at the concerts. A message on the nondescript jacket states Squeeze is reversing the usual practice of releasing demos long after the songs have appeared on an official CD. The band is, “putting the cart before the horse, so to speak, and sharing the process with you.” According to a tweet on SqueezeLiveBlog, Arse About Face is only being sold at certain dates on the current tour.

It’s a good investment in terms of quality as well as in limited quantity. “Tommy” has a fetching string arrangement (created via keyboards at the concerts) reminiscent of The Jam’s “Smithers-Jones,” and likewise offers a somber portrait of English working class life. In Squeeze’s song, the title character gets into an altercation with a black family when he’s out shopping for beer. After “shouting racist rubbish,” Tommy gets decked by the Dad. The sharp lyrics attribute Tommy’s ignorance to his being, “A wired and lonely person with no joy to call his own.”

The other three songs also highlight Difford and Tilbrook’s knack for clever wordplay and impeccable melodies. “Top Of The Form” exudes the raw energy of The Specials with its ska rhythms and twanging guitars. It’s a rebellious look back at the days of skipping school and watching Starsky & Hutch on TV instead. “Honey Trap,” a light and catchy look at a promiscuous school girl, sounds like vintage Squeeze, while “Who’s That” takes more of a playful Paul McCartney approach.

Hopefully, the fans who missed out on buying this enticing preview will be hearing these songs on an official Squeeze release in the near future.

It's been killing me since the day the show in NYC was rained on, that I wasn't able to get a copy of this demos E.P. Any lead on how to get it now? Don't suppose you'd be willing to share it or trade it for something?