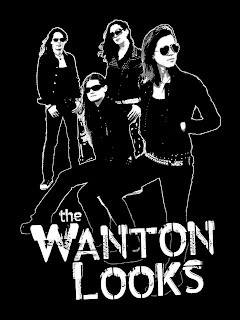 A few weeks back, I noted that the afternoon line-up of bands scheduled for Sunday, July 8th at the Lincoln Park Arts & Music Fest looked like it could be sponsored by Broken Hearted Toy. The Wanton Looks, The Handcuffs, and Dot Dot Dot have all been given plugs here at various times. I dropped by the Fest, which was held on Racine between Fullerton and Webster this past Sunday, and if this had been a Broken Hearted Toy event, I would have been proud.

As long as I’m taking credit for musical talent that afternoon at the Lincoln Park Arts & Music Fest, I might as well claim the pleasant weather was my doing as well. It was perfect for checking out the vendors, sampling wine and cheese, and most of all, watching some bands. The Wanton Looks, four women who’ve been playing the Chicago club scene for a few years now, took the stage around 2:30 PM. Their melodic blend of garage, punk, and hard rock has been getting favorable press, but until Sunday, I had never seen them.

The Wanton Looks’ Sunday show lived up to the hype, with elements of L7 and Joan Jett woven into songs from their self-titled full-length debut. Lead-singer-bassist Traci Trouble has a raw, powerful voice, and she was joined by guitarists Inga Olson and Susie Q, and drummer Meg Thomas on backup vocals. Songs like “Get Thru To You” and “All Your Fault” were hard-hitting and energetic, while “Neverending” found the women working at a slower pace. “86 Me” was more on the power pop side, with an added bonus of some serious jamming at the end. If it were at all possible for local garage bands to have hit singles these days, The Wanton Looks would have a serious contender with the fun and catchy, “Electromagnetic Force.”

The Handcuffs had three CDs to draw from, dating back to their 2006 debut, Model For A Revolution. They could have gone back further since the husband and wife team of singer-guitarist Chloe F. Orwell and drummer Brad Elvis first worked together in Big Hello, and Elvis has an impressive resume that includes The Elvis Brothers and Screams. He also currently plays drums with The Romantics, and was with them when they shared a double bill with The English Beat at The House Of Blues in Chicago a few weeks back. Guitarist Ellis Clark brings a lot of experience to The Handcuffs as well, having played plenty of solo gigs, along with his time with Epicycle and Social Act. Bassist Emily Togni and keyboards player Alison Hinderliter also contribute to the band’s well-crafted and energetic indie rock.

On Sunday, the group opened with the Beatlesque “Miss You On Tuesday,” from its latest effort, Waiting For The Robot. They also tapped into that release for the glam rock of “Dirty Glitter” and “Vinyl Isabella,” the funk of “Ooh Baby Baby,” and the fun audience participation number, “Everybody Waves Hello.” “Kiss This Goodbye” packed the same cutting-edge venom as Blondie’s “Rip Her To Shreds.” Orwell was a charismatic front woman, delivering high-powered versions of “Mickey 66” and “Jet Baby” from Model, as well as “I Just Wanna’ Be Free, Man,” and “Baby Boombox,” from the Electroluv CD. The Handcuffs finished with the appropriate and high-speed “One More Song.”

The coed band Dot Dot Dot followed (it was a good afternoon for women musicians), once again showcasing its ability to craft radio-friendly rock tunes like “Smile” and “Just Dance” that seldom come across as overly commercial. The single-named lead singer-guitarist Adam has a voice that sounds destined for hit singles, and while he really should cut back on instructing the audience to applaud after every number, he’s still an engaging performer. Dot Dot Dot includes guitarist-vocalist Rose and bassist-vocalist Little Lisa, both formerly of the eclectic cover band Catfight. They’re first rate musicians who can also handle lead vocals or join Adam on duets.

Anyone who missed Dot Dot Dot’s gig this past Sunday will have several more chances over the summer since Chicago recently passed a law stating that the band must play at every street festival in the city. Seriously, Dot Dot Dot has earned its dominance of the local outdoor performance scene through hard work, highly polished originals, and well-chosen covers. The band has three EPs for sale on its website
Posted by Terry Flamm at 10:24 PM