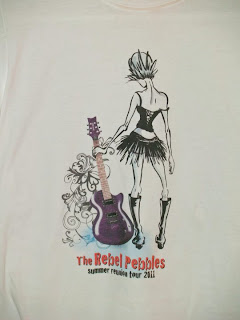 The 15th annual International Pop Overthrow - Los Angeles kicks off tonight with a six-band lineup at Molly Malones’s. This is the city where IPO founder David Bash staged his very first showcase of power pop and indie rock. In addition to Molly Malones, showcases will be held at Fais Do Do, Good Hurt, The Echoplex, On The Rox, Fitzgerald’s Irish Pub, and Orange County Fair. Bash has several impressive acts scheduled throughout the coming week, including The Names, The Records - featuring John Wicks, Maple Mars, The Rebel Pebbles (who reunited in 2011), Nushu, Spygenius, Jason Falkner, Sparkle* Jets UK, and rock and roll time lord Dave Rave.

Jeff Park Arts & Music Fest has some solid talent lined up for this weekend; including The Nicholas Tremulis Band tonight at 9:00 PM; Jason And The Scorchers Sunday at 6:30 PM, and Smoking Popes on Sunday at 8:30 PM.

Elsewhere on the street fest scene, Wicker Park Fest has Archie Powell And The Exports at 3:30 PM, Screaming Females at 5:30 PM, and Baseball Project at 7:15 PM tomorrow.

Musician Bill Steffey will celebrate a quarter of a century of creating songs and videos with the 2-DVD set 25: The Silver Collection. There will be a release party at Lizard’s Liquid Lounge on August 4th at 9:00 PM. Steffey’s new EP, Kid Ghosts is available now, and he’ll have some copies for sale at the Nomadic Art booth at the Wicker Park Fest tomorrow from noon to 3:00 PM.

The Nerdist website brought the sad news earlier this week that actress Mary Tamm, who portrayed the first incarnation of Romana in 1978 on Doctor Who, has died of cancer. Tamm’s take on the female Time Lord assigned to help Tom Baker’s Doctor, was definitely from the Emma Peel school of alluring and sophisticated heroines. She was one of the major reasons I began watching Doctor Who. There’s a tribute to her on YouTube.

Artist Shannon is best known for her portraits of The Beatles, and her work has also wound up adorning guitars owned by Cheap Trick’s Rick Nielsen. Shannon’s latest effort, a Dream Police guitar, will make its debut when Cheap Trick shares a double bill with Aerosmith in Virginia. Starting August 11th, a number of Nielsen’s axes will be on display as part of the Rick’s Picks exhibit at the Burpee Museum in Rockford, IL.

For the second year in a row, I was bowled over by live music at the Blue Whiskey Independent Film Festival’s  opening bash at Cutting Hall  in Palatine. In 2011, it was solo artist Chris Petlak (with a bit of accompaniment) followed by Dennis Florine (backed by a top notch band) that rocked out, and this past Tuesday, it was the seven-piece Band Called Catch that provided the fun.

But, first a bit of business. In my preview of this event, sarcastically titled, Get Me, I’m A Publicist, I criticized what I deemed the woeful lack of publicity the participants had generated. This was due partly to the amount of time it took to scour various websites just to find simple bits of info like what time the concert started, and also because I hadn’t seen any flyers or programs around Palatine.

Upon arriving at Cutting Hall, I told one of the venue’s reps that I was covering the concert for my blog, and mentioned that I had noted the poor publicity. He insisted I was completely wrong; hundreds of flyers had been distributed, and the concert was featured on Facebook. So, I promised him a retraction, although to my way of thinking, just mentioning the concert on Facebook without a starting time or a profile of the band is not effective PR. I’d be curious to know if anyone noticed that I went back and retitled the piece and softened some of my criticism.

Anyway, back to Band Called Catch, who are a high-powered live act, with two dynamic front people in vocalist-acoustic guitarist Tim Frank and vocalist Jess Lyons. The other members, guitarist Doug Waxman, bassist Ian Kelly Davis, drummer Matt Selby, sax player Tim K, and trombone player John D., are also stellar musicians who have a lot of fun onstage. The horn section was a show in itself; whenever they weren’t playing, these two guys were tearing around the stage doing silly dances and other comic antics.

Band Called Catch did mostly originals with an occasional cover tune like Ben Harper’s “Steal My Kisses” or Paul Simon’s “50 Ways To Leave Your Lover.” Just as Dennis Florine brought down the house with a cover of Adele’s “Rolling In The Deep” last year, Band Called Catch, with Lyons handling lead vocals, tore things up with their take on the Gnarls Barkley hit, “Crazy.”

The Blue Whiskey Independent Film Festival continues tonight with the feature films A.L.F., a drama from France directed by Jérôme Lescure; and the American thriller I Am Bad, directed by David Rackoff, along with four shorter films. The festival runs tomorrow from noon until 4:30 PM, and then from 7:00 to about 11:30 PM. There wil be an Awards Brunch at Emmett’s Brewing Company on Sunday. See the BWiFF website for the full schedule.
Posted by Terry Flamm at 11:34 PM