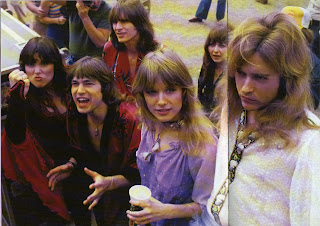 Although it includes studio versions of songs like “Alone” and “These Dreams,” Heart’s Strange Euphoria 3 CD box set isn’t so much a greatest hits package as it is a gift to the group’s most ardent fans. Stretching from a 1968å single by Ann Wilson’s pre-Heart band, The Daybreaks, to tracks from the 2010 CD, Red Velvet Car, it’s loaded with live recordings, demo versions, and previously unreleased material. A few of the tracks weren’t really worth pulling from the archives, but at its best, Strange Euphoria presents the Wilson sisters in ways most people haven’t heard before.

The “Crazy On You” demo, recorded in 1975, is fairly close to album version, but a demo of “Magic Man,” done around the same time, has a sparse, guitar-driven arrangement reminiscent of  The Animals’ “When I Was Young.” There’s a high-energy 1977 concert performance of “Barracuda,” and a 1994 live version of “Never” that features guest musician John Paul Jones on mandolin. Heart explores new territory with the sexy dance number, “Skin To Skin,” the authentic blues workout, “Love Or Madness,” and has a ball on the silly folk parody, “Boppy’s Back.” Strange Euphoria also includes a book with rare photos, and an hour-long DVD of Heart performing for a TV studio audience back in its Dreamboat Annie days.
Posted by Terry Flamm at 10:41 PM