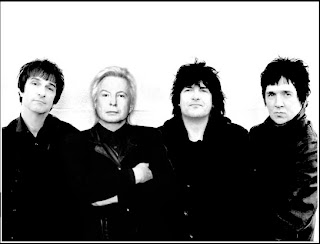 The Romantics will be opening for Squeeze this Friday night at a free show at Coney Island in Brooklyn. Here’s a  review I did of The Romantics/English Beat concert at The House Of Blues in Chicago. It ran in the online Illinois Entertainer last month.

The English Beat and The Romantics wouldn’t be the first names to spring to mind when considering the most popular acts of the late 1970’s and early 1980’s, but their recent double bill at The House of Blues in Chicago provided evidence of why the era was so much fun. Both acts had their moments in the spotlight back in the day, and each pioneered a sub-genre of cutting-edge rock. The English Beat arrived at the dawn of England’s ska revival, while The Romantics gave power pop a short-lived boost into the Top 40.

The current version of The English Beat, with Dave Wakeling as the only original member, eased into its set at The House Of Blues with “Rough Rider.” This amiable tune from I Just Can’t Stop It set the tone for a pleasant if not overly energetic performance brimming with Caribbean rhythms. The audience didn’t seem to mind, as it sang and danced throughout, and the group did occasionally turn up the heat on songs like “Twist & Crawl” and “Best Friend.”

Wakeling was in fine voice; hitting the high notes on “I Confess” and augmenting the beauty of the Andy Williams hit, “Can’t Get Used To Losing You” with some inspired scat singing. Antonee First Class, carrying on the Toaster role once held by Ranking Roger, joined Wakeling on harmony vocals and delivered a series of quick and funny raps between songs. He frequently gave props to Wakeling and reaffirmed the band’s mission of promoting racial harmony. Sax player Matt Morrish played a prominent role, especially on songs like “Save It For Later.”

There was also a rousing version of “Tenderness,” a song Wakeling originally did with the post English Beat band General Public, and a hardy mix of dub and funk on The Staples Singers’ “I’ll Take You There.” But it wasn’t until the end of their 90-minute-plus set that Wakeling and company really cut loose; delivering high-speed versions of “Ranking Full Stop” and “Mirror In The Bathroom” fueled by Morrish’s playing. Instead of an encore, the band members lingered a while on stage, chatting and shaking hands with audience members.

The Romantics preceded The English Beat with an hour-long set that explored the harder edges of power pop. With three original members, along with drummer Brad Elvis, who has been on board since 2004, the Detroit-based band performed like a well-tuned sports car. Guitarist-vocalist Mike Skill laced the songs “Stone Pony” and “Tomboy” with his energetic playing, and joined lead vocalist-guitarist Wally Palmar and bassist Rich Cole for some impeccable harmonies. Opening with “When I Look In Your Eyes” from its self-titled debut, the closest the band came to slowing down was on the seductive hit single, “Talking In Your Sleep.”

Palmar’s strong vocals and spirited harmonica playing led the way on catchy songs like “Rock You Up” and a cover of The Kinks’ “She’s Got Everything.” Brad Elvis, who also performs with the Chicago-based indie rock band The Handcuffs, kicked off “Friday At The Hideout (Judy Be Mine)” with some furious drumming. The Romantics picked up speed as the set progressed, culminating with a revved up “What I Like About You.” As the audience danced and shouted “Hey!” throughout, it was obvious that all those years of being played at weddings and on commercials has done little to diminish this classic power pop song’s appeal.
Posted by Terry Flamm at 9:45 PM