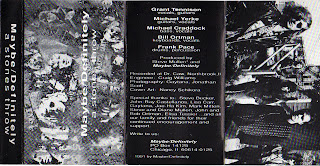 Note: This review originally ran in the Illinois Entertainer in 1991.

Maybe/Definitely’s opening salvo of Midwestern power pop on the independently released A Stone’s Throw (note: the missing apostrophe isn’t my work) would be impressive enough based on the musicianship, but lead vocalist-guitarist Grant Tennison’s lyrics take this debut to an even higher level. Tennison has a knack for turning a phrase, as he covers everything from busted romances to street crime. “Another Thorn” depicts a guy overwhelmed with guilt at the thought of leaving his girlfriend, while the acoustic-based ballad “Shame” visits a neighborhood steadily going downhill.

Guitarist Michael Yerke helps fuel the hard-hitting “Breaking The Maze,” and “Swallow That Potion” benefits from Bill Ortman’s keyboards work. “All I Want” is a catchy pop tune, but Maybe/Definitely’s best work on A Stones Throw comes on “The Great Divide,” which calls to mind the classic power pop band, The Plimsouls.

Sadly, there’s almost no mention of Maybe/Definitely on the Internet, except for a 1992 Chicago Tribune article by writer Mary Stevens .
Posted by Terry Flamm at 11:20 PM

Awesome band. I can't believe these songs aren't available on iTunes. They were played on the radio nationally and here in Chicago.

Awesome band. I can't believe their songs have not been made available on iTunes for others of new generations to discover and enjoy