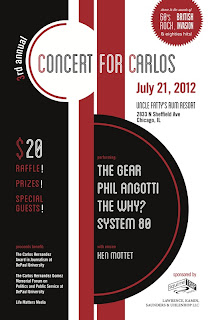 Angotti and members of The Why, a covers band created specifically for the event, provided a preview by performing a few songs on WGN News this past Monday. Other acts involved include British Invasion Tribute band, The Gear, and 1980s tribute band, System 80. The $20 admission includes a raffle ticket. There will also be a silent auction.

Illinois Entertainer Editor Steve Forstneger announced earlier this week that he will be leaving his post after seven years, to pursue a career in real estate. I’d like to thank Steve for all the times he went out of his way to acquire CDs I had requested to review, and for arranging my interview with Graham Nash. Steve was the fifth IE Editor I’ve worked for, and they’ve all been top notch. Janine Schaults, who has worked as an editorial assistant at the publication, and has logged time at the Chicago Tribune and 101.1 FM radio, will be taking over for Steve.

Thrift Store Halo, the Chicago power pop trio that released the impressive World Gone Mad CD back in 1998, will be reunited as the opening act when The Zombies visit Viper Alley in Lincolnshire on July 31st. Original TSH members, lead singer-bassist Frank Gradishar, guitarist Brent Seatter, and drummer Scott Proce have been rehearsing for this dream gig (Gradishar is reportedly a huge Zombies fan), and according to Seatter, they may even come up with some new material. The trio also currently performs with vocalist Bridgette Grace in the cover band, Vinyl Answer.

Artist Kimmy Om has found a way to turn acoustic guitars and skateboards into works of pop art by using woodburning tools. She’s currently looking for funding on Kickstarter to enable her to transform higher quality instruments that could be played by serious musicians. I believe I first saw her mentioned in a Facebook post from the Beatles tribute band Liverpool Legends, and Om has created a really cool looking Beatles portrait on a guitar.

Speaking of Liverpool Legends, the group has a CD of original material coming out soon. Fans can get a preview by checking out the song “Condescending” on SoundCloud. And yes, there’s a definite Fab Four influence.

Singer-bassist Mike Cohen has a ways to go before he’ll be in hundreds of bands, like fellow Chicagoan Dag Juhlin, but he does have a pretty hectic schedule. He’s performing tonight with Pop Dollys at Shark City in Glendale Heights, as the opening act for American Idol finalist Chris Medina. The band’s new single, “Kitten,” can be heard on its MySpace page. Cohen isn’t off base in describing the song as The Smithereens meet Cheap Trick.

Meanwhile, Cohen and singer-guitarist Jeff Janulis, who lead his other power pop outfit, The Abbeys, have fortified the line-up for their covers band side project, The Everly Hillbillies. They’ll be performing as a quintet tomorrow night at the picnic grove next to Chet’s Melody Lounge in Justice, at 7:30 PM. There are six other bands scheduled to perform.

Singer-guitarist Dag Juhlin, by the way, will be performing with Expo ‘76  next Wednesday at FitzGerald’s Nightclub in Berwyn in what the eclectic covers band calls “Our Ninth Annual July 25th Celebration!” They’ll be joined by the Total Pro Horns. I’m not sure what the significance of July 25th is, other than it’s my birthday.

The Right Tidys, The Collectors, Big Sur, and Fair Moan will also be celebrating my birthday, at Beat Kitchen on Belmont Avenue.

Time Out Chicago media columnist Robert Feder reported earlier this week that The Reader will be leaving its home on the corner of State and Illinois Streets and moving into the Chicago Sun-Times building. The Sun-Times parent company recently purchased the weekly free paper. I have fond memories of picking up an armload of Readers every Thursday at 11 East Illinois Street, and bringing them back to my co-workers at the graphic design firm where I met my future wife, Pam. Illinois Street is the location of a fictional weekly free paper in my some-day-to-be-published rock and roll novel.

Dublin-based artist Georgina Flood, who has done numerous eye-popping portraits of The Beatles, as well as Marilyn Monroe, Elvis Presley, and other celebrities, has just been added to the roster of guests for Fest For Beatles Fans - Chicago.

For those of us who enjoy The Nerdist website, Chicago has something to offer with The Last Arcade website, which bills itself as, "Chicago’s Source For All That Is Geek."

Chicago’s Mary-Arrchie Theatre is bringing its highly successful production of the Tracy Letts play, Superior Donuts to the Metropolis Performing Arts Centre in Arlington Heights. There were performances on July 17th through 19th, and there will be three more on July 23rd through 26th.
Posted by Terry Flamm at 10:58 PM