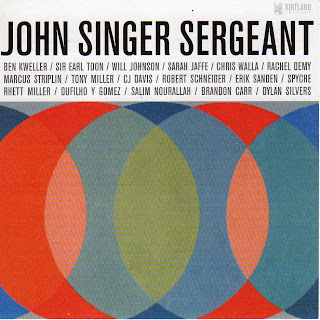 John Dufilho somehow found time to record his second solo effort while being part of three bands. Working under the name John Singer Sergeant on this self-titled effort, he plays all the instruments while a rotating cast of indie rock vocalists bring his whimsical lyrics to life. The 14-song collection, dubbed John Singer Sergeant (The Music And Songs Of John Dufilho), has the feel of a casual gathering of friends.

Robert Schneider, Dufilho’s band mate from Apples In Stereo, takes center stage on the energetic “Jinxed,” but Rhett Miller of Old 97s is underused on the minimalist “My Own Worst Critic.” Sir Earl Toon of Kook & The Gang makes the funky love song “Dizzy Joy” even more engaging. The slow but melodic “Normal Sounds Weird” features a duet by Chris Walla and Rachel Demy while Danette Dufilho and Lefty Gomez repeat the title of the mostly instrumental Peter Sellers homage, “Birdy Num Num.” Having numerous vocalists underscores the range of material on John Singer Sergeant, from Ben Kweller’s work on the jagged “Mountains, Oceans, Elephants,” to CJ Davis’s soothing delivery on the childlike “Kick Your Feet Up High (Kids Song).”