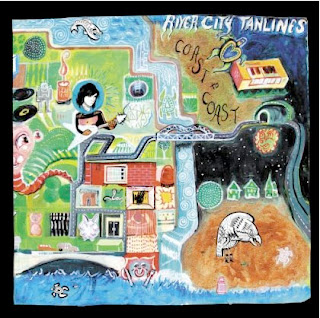 As explosive as River City Tanlines can be on Coast To Coast, this latest CD from the Memphis-based trio also showcases lead vocalist-guitarist Alicja Trout’s gift for songwriting. Comprised of Trout and the powerful rhythm section of bassist Terrence Bishop and drummer John Bonds, River City Tanlines have released a number of CDs and vinyl records on various labels since 2004. Judging from some older clips on YouTube, it seems likely the band evolved from hardcore punk to a more balanced approach without losing a bit of its edge.

“Life used to be fun when I had no one,” Trout declares at the start of “Can’t Stand U Anymore,” a blistering farewell to a lover, and the trio also hits hard on “I Don’t Get It,” while adding a galloping rock-a-billy beat. “Stop My Heart,” has a fun girl group sound while exuding the DIY spirit of the early punk days. “Dark Matter” opens with four minutes of instrumental hard rock before cutting loose with Trout’s raw vocals and a high speed punk arrangement. River City Tanlines tap into garage rock on “Lights” and the down and dirty “Waiting For Nothing,” which borrows a bit from “Pushing Too Hard” by The Seeds.

River City Tanlines are having a record release party for Coast To Coast in Chicago on August 4th at Crown Liquors, 2821 N. Milwaukee Avenue. The time and ticket price have yet to be determined.
Posted by Terry Flamm at 3:41 PM