Your Own Private I.P.O. 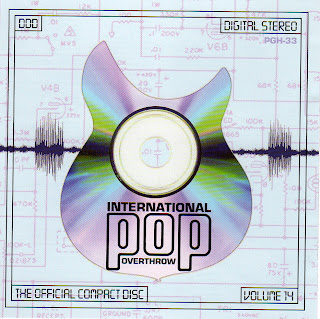 Having completed the English leg of its 2012 schedule, International Pop Overthrow  has returned to American shores. Toward the end of July, this vagabond celebration of power pop and indie rock will return to the city of its birth. Los Angeles is where I.P.O. got its start back in 1998, when founder/CEO David Bash gathered several bands to honor the spirit of the late singer-guitarist Jim Ellison and his band, Material Issue. Over the years, Bash has showcased hundreds of entertaining performers in clubs across the U.S. and U.K.

He’s been doing it on compact discs as well. International Pop Overthrow Volume 14 is the latest in a series of CDs featuring participants from the annual music festival. These aren’t live recordings, but tracks culled from the various artists’ own releases. The three-disc set illustrates the multitude of approaches that fit under the power pop umbrella, and also signals Bash’s more recent willingness to embrace other current rock sub-categories.

The Pondhawks, Susan Hedges, and Dee Long pursue a more techno sound; The American Professionals, and The Starfire Band go more for mainstream rock; and Go Time!, Clockwise, and Fortune 500 add rough edges that tap into garage and even hard rock. There’s also some funk from Danny Echo, and indie rock courtesy of Broken Alphas.

That said, Volume 14 serves as a massive treasure chest of gems for diehard power pop fans. The Turnback and Spygenius use ringing guitars reminiscent of The Byrds; Blue Cartoon evokes The Beatles; and The Dahlmanns, Nushu, and Laurie Biagini update the 1960s girl group sound. The Kik, Van Go, and Bastards Of Melody unleash pure power pop on their songs.

There are several good tracks not mentioned here, making Volume 14 a worthy souvenir for people who’ve been to an International Pop Overthrow gig, and as a resource for discovering good bands.
Posted by Terry Flamm at 11:37 PM