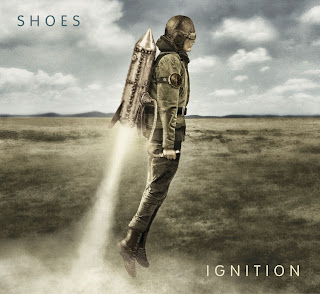 One of the power pop genre’s best-loved bands, Shoes, will release its first CD of new material in almost two decades, on August 14th. The 15-track Ignition was recorded by founding members John Murphy, Jeff Murphy, and Gary Klebe over the past few years.

We’ll have tea and crumpets. The Hollies aren’t exactly pulling out all the stops while celebrating their 50th Anniversary (still no world of a US tour) but at least we Yanks can buy a commemorative mug  from the band’s official website. I’d also highly recommend Radio Fun, a collection of songs The Hollies recorded live at the BBC from 1964 through 1968.

Although Chicago’s forecast for this weekend calls for sunny skies and a high in the 90s, I won’t believe it until I’m strolling through the Old Town Art Fair with sweat forming on my brow. This annual event has been cursed with rainy and cold weather for the past few years, even when the weather men have called for pleasant conditions.

The Old Town Art Fair is one of the better art shows over the summer, and the Victorian homes in the Lincoln Park neighborhood add to its classy ambience. The Wells Street Art Festival Fair, which also runs this weekend, and is within walking distance from the Old Town Art Fair, (there really should be a discount if you go to both) has more of party feel, with bands like Dan Hubbard And The Humadors, Dot Dot Dot, and American English performing on the outdoor stages. Just keep in mind that the Wells Street Art Festival will be packed storefront-to-storefront with revelers, if indeed, the weather cooperates.

Also on tap this weekend is the strangely-spelled Andersonville Midsommarfest, on Chicago’s north side. Looking at the lineup of bands for the Clark and Foster stage, I’d almost recommend spending the entire weekend there. Saturday has The Webstirs, Nicholas Tremulis, Dolly Varden, and The Del Marracos; Sunday features The New Invaders, Planet Claire, and Expo 76.
Music On Stage will be performing the adult-oriented puppet show Avenue Q this weekend and next at Cutting Hall in Palatine.

Also in my cozy town of Palatine, the young musicians in Arkane Daze, Chupacabra, The Skelters, and White Shadows will be competing in a Battle Of The Bands jointly sponsored by the Palatine and Salt Creek Park Districts at 7:00 PM Monday evening at the Fred P. Hall Amphitheater.

Pop Dollys will be playing catchy power pop music at the 2012 Beer Grove Music Fest at 5:00 PM tomorrow, June 9th at Chet’s Melody Lounge in Justice. The festival kicks off at noon.

Make them sit in the comfy chairs! Despite a well-deserved reputation for cutting-edge productions, the Mary-Arrchie Theatre wants patrons to have a nice place to sit. So the critically acclaimed company is hoping to raise $3,000 via its 60 Seat Campaign on the Indiegogo fundraising site. Also at Mary-Arrchie, Sonja Moser’s adaptation of Electra will run from July 6th through the 29th.

Ralph Covert’s Acoustic Army will be performing at FitzGerald’s Sidebar on June 15th. Now that summer’s almost here, I wonder if he’ll be pulling double duty at the Palatine Street Fest with The Bad Examples and Ralph’s World again this year.

Garage rock fans in New York might want to check out Super Rock Thursday at The Bowery Electric on June 21st. The Fleshtones, Steve Wynn and The Miracle 3, and Palmyra Delran, formerly of the four woman band The Friggs, will be sharing the bill, along with Ivan Julian and Stupidity. Tickets are $12 in advance $15 at the door. I’d like to see this lineup come to Chicago.