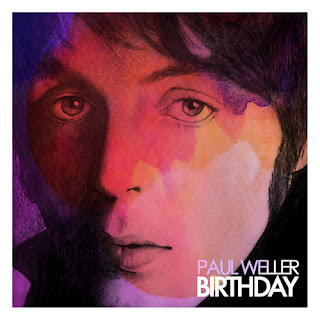 Fool On The Hill portrait by Georgina Flood.

Singer-guitarist and former member of The Jam, Paul Weller, plans to celebrate Paul McCartney’s 70th Birthday by making his version of The Beatles “Birthday” available for one day only on iTunes this coming Monday, June 18th. All proceeds will go War Child, a British charitable organization that helps children in war-torn countries. Fans can find the link on Weller’s website, Facebook or Twitter. The striking art for this cover of “Birthday” uses well known Beatles artist Georgina Flood’s Fool On The Hill portrait.

This was a perfect night to catch an outdoor concert by Beatles tribute band American English at the Fred P. Hall Amphitheater in Palatine. The area around the stage was packed with fans. After doing a set of early Beatles tunes, the lads took a break, returned as Herman’s Hermits, and performed songs like “I’m Into Something Good” and “Mrs. Brown, You’ve Got A Lovely Daughter.” Not really, but as good as these Beatles tribute bands are, at this point, I’d love to see one of them do something to  break with the usual format of dividing the show into the three distinct eras of Beatles music.

The Sounds Of Summer series, which is sponsored by the village’s Park District, kicked off its 25th Anniversary Season with a particularly enjoyable selection of songs by the Palatine Concert Band this past Wednesday. No, they’re not rock and roll, but those of us with eclectic tastes in music enjoy them. 7th Heaven takes the stage next Wednesday, June 20th, and The Neverly Brothers will be rocking on Friday, June 22nd. You might want to get to Palatine early for The Neverly Brothers show and check out the Cruz’n Friday Nights car show hosted by the Palatine Muscle Car Association.

Speaking of British Invasion bands, The Zombies, featuring Colin Blunstone and Rod Argent, will be playing hit songs like “Tell Her No,” “Time Of The Season,” and “She’s Not There,” at Viper Alley in Lincolnshire on July 31st, and at Mayne Stage on Chicago’s north side on August 1st.

The Bad Examples will be performing a free concert next Friday night at Navy Pier, toward the south end, near the Grand Ballroom. The show starts at 8:30 PM.

Wes Hollywood will be holding a record release party for his recent collection of first rate power pop songs, Fantasy Arcade next Friday at The Darkroom, in Chicago. Roxy Swain, who are currently working in the studio on their next effort, will be the opening act.

Congratulations to Rich Cotovsky and the Mary-Arrchie Theatre on 26 years of in-your-face productions, starting with a double bill of Cowboy Mouth and 4 H Club, on through the most recent, Superior Donuts. The next production, Electra, opens on July 26th.

The Blue Whiskey Independent Film Festival will screen over 25 entries from July 25th through the 29th at Cutting Hall in Palatine. The festival kicks off with a free concert by Band Called Catch, a sort of coed version of Mumford & Sons, on July 24th.

Maybe they should call it The Broken Hearted Toy Festival. I had nothing to do with it, but three bands I’ve plugged here on BHT will be performing on the same afternoon at The Lincoln Park Arts & Music Festival  on Sunday, July 8th. The four woman garage rock band, Wanton Looks perform at 2:25; The Handcuffs, the coed indie rock band fronted by singer-guitarist Chloe F. Orwell and drummer Brad Elvis come on next at 3:55; and the infectious synth rockers Dot Dot Dot, follow them at 5:25.

Speaking of Brad Elvis, he’ll be pounding the drums for The Romantics when they appear along with The English Beat next Wednesday night at The House Blues.

Pass around that Ripple. John Petitt, a member of the same Society of Children’s Book Writers and Illustrators group that I belong to, got a nice writeup in the online Palatine Patch newsletter. Petitt (whose name is misspelled in the article) and his fellow teachers at the Culver Elementary School in Niles have been sharing his YA novel, Ripple Effect with their students. The kids really got into it, which should be a major selling point for shopping the book to literary agents and publishers. Petitt is also a member of the rock trio, This Is This .
Posted by Terry Flamm at 11:54 PM