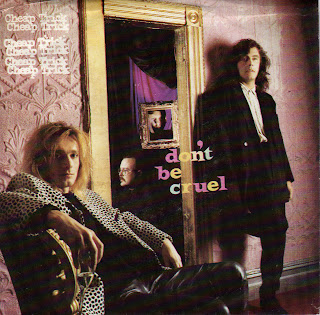 It was a coincidence that I was wearing a Cheap Trick t shirt this past Sunday; the day after they performed as part of a double bill with Aerosmith at the United Center in Chicago. “Did you see them last night?” the cashier at our Jewel in Palatine asked while I was paying for my groceries. At first I didn’t know who he meant, but when he pointed at my chest I figured it out. As much as I like Cheap Trick, I had somehow missed hearing about that gig.

According to Althea Legaspi’s review in today’s Chicago Tribune, both bands put on a good show. Legaspi was once my editor at the Illinois Entertainer, and now writes for the Trib. She noted that Rick Nielsen played a five-necked guitar on the final song, and Robin Zander was in fine voice.

Back in 1988, Cheap Trick released a completely irresistible cover of Elvis Presley’s “Don’t Be Cruel”  as a single from its Lap Of Luxury album. A perfect companion to Queen’s “Crazy Little Thing Called Love,” it showcases Zander’s ability to adapt his vocals to any situation; Tom Petersson’s loping bass lines, and some playful “bop bop” backup vocals that conjure images of sock hops and soda shops. Bun E. Carlos’s rockabilly beat adds to fun and Nielsen cranks out a vintage sounding guitar solo.

It’s likely this nostalgic tune reached well beyond Cheap Trick’s fan base, and the fetching video certainly helped sales as well. In a perfect world, any number of this band’s melodic rock tunes would be hit singles, but such is the lot of a power pop band.

Sixteen years ago, my wife Pam and I lent this 45 to the DJ who played the songs at our wedding reception. We chose a service that would allow the bride and groom to pick out all the songs. Well, almost all of them - he did sneak in “YMCA.” But when you find a DJ that agrees to play power pop tunes at your wedding, you cut him some slack.
Posted by Terry Flamm at 10:52 PM