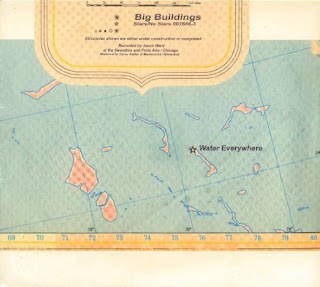 Note: This review originally appeared in the Illinois Entertainer in 2006.

The Chicago-based Big Buildings unleashes an amiable recklessness reminiscent of The Replacements throughout much of its second full-length CD, Water Everywhere. There are also elements of classic hard rock and even a bit of Americana. The rebellious “Who Makes The Rules?” and catchy “Split Personality” are prime examples of the band’s raw approach to recording.

All four musicians cut loose on the instrumental passages within the six-and-a-half-minute “Submarine” without a hint of self-indulgence. “Grease Fire,” a slower rock tune, taps into the power of the Rolling Stones, while the country flavored Mountainsides” and “Invisible Republic” come across as more introspective.
Posted by Terry Flamm at 10:11 PM