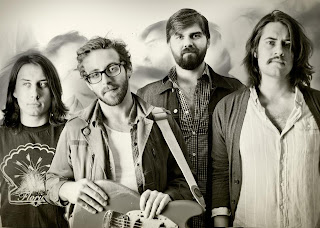 Here’s hoping Chicago’s weather improves quickly, because some outdoor festivals, like Maifest  in Lincoln Square, and the 57th Street Art Fair  in Hyde Park, are already being held this weekend. The bitterly funny power pop band Archie Powell & The Exports, whose recent CD, Great Ideas In Action, looks to be one of the year’s best, will be performing at SausageFest this Sunday afternoon at 3:15 PM. Other acts scheduled for the SausageFest, which is located at Sheffield and Addison, include Company Of Thieves, Treaty Of Paris, and Lovehammers.

The Fest For Beatles Fans has announced the lineup of guests for when it comes to Chicago on the weekend of August 10th - 12th. Musicians Spencer Davis and Tom Scott will be on hand, along with Mark Hudson, the comedian/musician who produced some of Ringo Starr’s CDs, and former Beatles Fan Club Secretary, Freda Kelly, who will the subject of an upcoming documentary called Good Ol’ Freda. I’ll be interested in finding out how that’s going since I helped fund it on Kickstarter. The highly-talented Beatles tribute band, Liverpool, will be performing again this year, and Chicago’s own Beatlemaniac, WXRT DJ Terri Hemmert will be serving as MC for about her 35th time. British writer-producer Martin Lewis will also be back again this year, and like Hemmert, he’s a gifted interviewer.

Most people think of The Beatles when it comes to Liverpool, but Shindig Magazine and the online publication, The Quietus are looking to make the city the world capital of psychedelic music at least for one day. The Liverpool International Festival Of Psychedelia will be held on September 29th at the Camp & Furnace venue. So far, Time & Space Machine, Dead Skeletons, The Lucid Dream, and The Shook-Ups are scheduled to blow people’s minds.

Author! Author! Members from my writers group are keeping busy these days. Artist Terri Murphy will be celebrating the release of her new picture, book, One Day I Went Rambling at the Prospect Heights Library tomorrow afternoon at 3:00 PM. Those interested in being part of the festivities can call the library at 847-259-3500 or check it out online.

Cherie Colyer, whose paranormal novel, Embrace was published by Omnific earlier this year, will be one of the six authors in a discussion panel led by Esther Hershenhorn at the Printers Row Lit Fest next Saturday at 1:00 PM. The panel is titled Oh, The Places You’ll Go! Writing for Children Today!

Marian Manseau has been busy promoting Merely Dee, her novel based on the Eastland Disaster, including a recent appearance on WGN News.

A hearty welcome to my new Palatine neighbor, Rock N Roll A La Mode, which opened today just down the street. It’s a retro ice cream parlour/burger joint with a classic rock theme that includes a pair of guitars on the walls and a big screen TV showing bands like Bon Jovi. Owner Tyler Holcomb is currently the bassist-vocalist with the Hi-Infidelity cover band, and has also played with Hairbangers Ball and ARRA.

Holcomb’s holding off on Rock N Roll A La Mode’s official grand opening, but when it comes, there could be an acoustic performance by his band. There’s a small stage at the front of the venue, with a mural of a large audience on the nearby wall. In addition to acoustic sets, Holcomb envisions karaoke for kids 15 and under. The place is still a work in progress; more guitars could be added, and Holcomb wants to have another mural, done on one of the walls leading to the restrooms. “I just wanted to give it a rock and roll flair,” Holcomb said of his new business venture.

Congratulations to singer-songwriter/author Dean Milano, who was featured in this week’s edition of the Secret History Of Chicago Music in The Chicago Reader. Milano was also a guest on Nick
Digilio’s WGN Radio show, discussing his book, Chicago Music Scene: 1960s & 1970s.

Indie rock band Whitewolfsonicprincess liked doing its CD release party for 10 + 1 at the Red Line Tap so much, they’re returning for another gig, on June 8th.

I was saddened to learn about the passing of Mr. Imagination, an innovative artist whose work can be found at The Smithsonian, as well as at the Chicago location for The House Of Blues. Back in 1989, when I first started working with the Famous In The Future comedy group, we used to rehearse in Lake Sirmon’s apartment, which was just above Mr. Imagination’s studio in a building on Clark Street, near Wrigley Field. I met him on a few occasions, and he once gave me a pin of a small ceramic shirt and tie. I still have it.