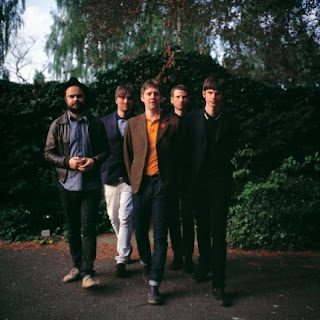 Note: This review originally appeared in the online Illinois Entertainer.

Shortly after the Kaiser Chiefs opened their concert at House of Blues, vocalist Ricky Wilson offered a cheeky introduction for the first single from the band’s latest release, by declaring, “It’s new, it’s brilliant, and it’s called ‘On The Run.’” The capacity crowd readily embraced the melodic satire from Start The Revolution Without Me, and everything else the band played in a rousing 90-minute set. Kaiser Chiefs may not be as highly regarded in the States as they are in their native England, but they do have an avid following in Chicago.

“Guys, guys, guys, settle down!,” Wilson teased at one point as the audience continuously clapped and sang along. The performance had the feel of partying in an English pub, although, definitely amplified. Despite having five successful and critically acclaimed CDs under their belts, the musicians exuded a youthful intensity. Wilson and drummer Nick Hodgson, who added spirited backup vocals, were particularly active in engaging the crowd. Keyboards player, Nick “Peanut” Baines, sporting a fedora with blinking lights, gave songs like “Good Days Bad Days” and “Everyday I Love You Less And Less” an infectious new wave energy.

Much of the appeal of catchy songs like “I Predict A Riot” and “The Angry Mob” is the way the lyrics could serve as slogans at a political rally. Wilson brought them to life, pumping his fist, or dodging and weaving like a prize fighter. At one point, he left the stage for a new vantage point on top of the bar. After revving up the audience with a barrage of fast tunes like “Kinda Girl You Are” and the earlier hit single, “Ruby,” it was surprising that Kaiser Chiefs finished on a more sedate note with “Love’s Not A Competition (But I’m Winning).” But the audience didn’t seem to mind. After a pair of well-received encores, Wilson thanked the crowd and tossed aside his mic. Those familiar with Kaiser Chiefs no doubt left satisfied, while it’s safe to predict newcomers to the band’s joyous riot performance style would want to go out and stock up on Kaiser Chiefs CD’s.

Opening act empires muscled their way through a 35-minute set that blended hard rock with elements of grunge. The Chicago/New York-based band performed songs from its most current CD, Garage Hymns, as well as the upcoming EP, Can’t Steal Your Heart Away. The title track of that EP, and other hard-hitting songs, were delivered via thundering drums, shimmering guitars, and  a charismatic vocalist who could growl as well as work in a more soulful vein.