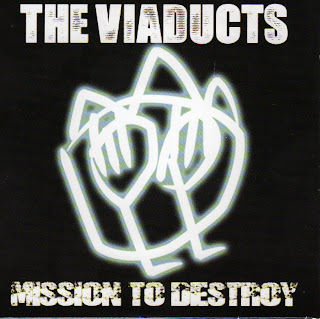 Most of the songs on this full-length debut from the Chicago-based trio, The Viaducts, spring from lead vocalist-guitarist Jimmy Rane’s fascination with relationships. Not just romantic entanglements, although there are plenty of those on Mission To Destroy, but also the emotional connections between family members. Backed by drummer Erik Swanson and bassist Richard Bilancia, Rane sets his observations to melodic ballads and hard-hitting rock tunes.

On “Tell Me Sister,” which is propelled by Swanson’s rumbling beat, a brother resists his wayward sibling’s request that he administer a beat-down to a guy who’s crossed her. “Dove Bar” is a bittersweet parent-to-kids message, while “It’s Just Part Of The Game” depicts the ups and downs of marriage with lines like “We’ve all cried a thousand tears but not all of them sad.” These ballads are well-crafted and heartfelt, but The Viaducts could make them even better with a little more variation in the arrangements.

Mission To Destroy is the most fun when the band cuts loose along with Rane’s quick and clever lines on power pop songs like “Drive-Thru Girl” and “I’m Your Man.” “Your Smiling Face (Walkin’ By In Blue Jeans)” is an Americana love song in the tradition of Buddy Holly and Bruce Springsteen, while “Suffering” evokes The Ramones with its revved-up tale of some poor guy’s mounting troubles.
Posted by Terry Flamm at 10:41 PM