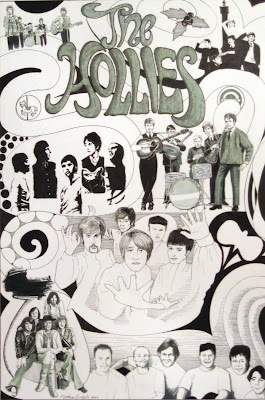 When Chicago Comic-Con was held last August in Rosemont, it enticed sci-fi and pop culture fans with aisles of merchandise and numerous celebrity guests. Another highlight was Artist Alley, a sprawling marketplace where creators of printed as well as online comic books hawked their work. It was interesting to chat with them, but hard not to feel a twinge of guilt whenever I walked away without buying something.

One of the artists who caught my eye was Chicago native Steve Guzelis, who along with Tom Wachowski, founded Strange Fun Comics in 1999. They added other artists over the years, publishing titles like Legends of Tarot, Cali Enti, and The Party, as well as Strange Fun.

Guzelis also creates posters that feature his comic style renditions of rock stars like The Yardbirds and Pink Floyd. I was disappointed that Bands Of The Psychedelic ‘60s, a colorful montage that featured The Beatles, The Rolling Stones, and The Jimi Hendrix Experience, didn’t include The Hollies. When I asked if he had ever done a poster of them, Guzelis explained that while he was aware of the band, he didn’t think a Hollies poster would be a big seller.

As if reading my mind, Guzelis offered to make one for me. His asking price was reasonable so I took his card and promised to think it over. Shortly afterward, the concept of a history of The Hollies came to me. A poster that would chart the band from the early 1960s up to the post 2000 line-up that featured Carl Wayne as lead singer. I sent an e-mail to Guzelis, detailing my ambitious idea, and adding that I understood it would cost more than the price we had originally discussed. Guzelis wrote back that the history poster would indeed cost more, but he was up to the challenge.

A few weeks later, the poster arrived, and I’m extremely happy with it. Guzelis tied the various incarnations of The Hollies together with a 60s style swirling backdrop and added assorted icons like a carousel horse and a sprig of holly. Once I have it framed, it will take a place of honor in my already crowded media room. For anyone interested in commissioning a portrait of a favorite band, or checking out some imaginative and humorous comic books, visit the Strange Fun Comics website.