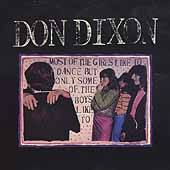 Each day this month, I’ll be spotlighting a song that seems particularly appropriate for the Halloween season.

Don Dixon is best known as a producer for cutting-edge and power pop artists like R.E.M., Let’s Active, and Marshall Crenshaw, but has also recorded his own work. “Praying Mantis” is on a 1985 album with the lengthy but truthful title Most Of The Girls Like To Dance But Only Some Of The Boys Like To. It’s a tongue in cheek pop song that likens giving into sexual temptation to the fate of the male praying mantis, who is devoured by the female while they’re mating. Backed by a catchy, finger-snapping arrangement, Dixon warns, “She bit off his head so he would not feel the pain./She wanted his body so bad she ate his brain.” Featuring some twangy guitar, this 1960s style tune would be perfect to dance to at a Halloween party. But be careful!
Posted by Terry Flamm at 12:15 PM