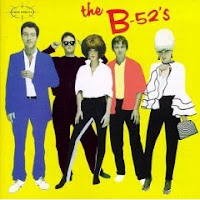 This has been an especially busy time for discovering new planets. Last week, astronomers spotted a whole batch right outside Earth’s solar system, and just yesterday, the Chicago Sun-Times reported that one in particular has some of the essential elements to support life. According to writer Ryan Flinn, NASA has detected water, methane, and carbon dioxide on planet HD 209458b. It has pink air and all the trees are red. No one ever dies there. Wait a minute, those last two lines are about Planet Claire, the fictional orb concocted by The B-52’s on their self-titled debut album. Back in 1979, there had never been a group quite like this before. The B-52’s used oddball instrumentation, like a toy piano, a fire alarm, and a walkie talkie. And their lyrics were pure nonsense. Opening with a lengthy instrumental passage that features eerie keyboards, “Planet Claire” introduces us to an unnamed alien who came from the title planet via a Plymouth Satellite that she drives faster than the speed of light. Like all Clairelings, she doesn’t have a head, so it’s hard to imagine how she could see where she’s going. Then again, you could say the same thing about Earthlings who text while driving. Vocalist Fred Schneider affects an appropriately silly tone throughout the song, especially when he screams, “WELL SHE ISN’T” in response to speculation that the alien is “from Mars or one of the seven stars that shine after 3:30 in the morning.” Unlike other outer space invaders, this visitor from “Planet Claire” doesn’t appear to have any evil plans. She’s been partying here on Earth for three decades, and she might even be Paris Hilton’s BFF.