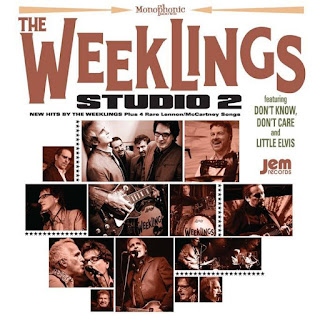 It’s no surprise The Weeklings continue to draw from The Beatles on this second effort since vocalist-bassist Glen Burtnik and vocalist-guitarist John Merjave are also members of the popular Beatles tribute band Liverpool. As with their debut Monophonic, The Weeklings mix original tunes with vintage rarities The Beatles composed but never officially released. This time out though, the emphasis is on songs Burtnik composed with vocalist-keyboards player Bob Burger, with only a third coming from Lennon and McCartney. The band also has a new drummer now that Joe Bellia has replaced Dave Anthony.

Sporting a cover that mimics the Second Album by The Beatles,’ Studio 2 features short, peppy tracks that were recorded at London’s Abbey Road Studios. On “Morning, Noon And Night,” The Weaklings adroitly tap into the British Invasion, right down to the harmonica playing. “You’re The One,” the only Burtnik-Merjave composition, and “Little Elvis” have a touch of rock-a-billy, while the inspired vocal interplay on “Don’t Know, Don’t Care” comes across like The Hollies covering a Chuck Berry tune.

“You Must Write” shows these guys still know how to go treasure hunting in the Beatles catalog, and Burtnik’s loping bass is particularly impressive. The exquisite harmonies on “Because I Know You Love Me So” underscore Lennon and McCartney’s fascination with The Everly Brothers, while the rollicking “Some Days” is an irresistible look back at the English lads’ childhood days. “Loved Of The Loved,” like The Weeklings’ own “Love Can,” is almost too pretty and polished, but overall, Studio 2 is another round of Anglo-flavored fun.
Posted by Terry Flamm at 9:53 PM