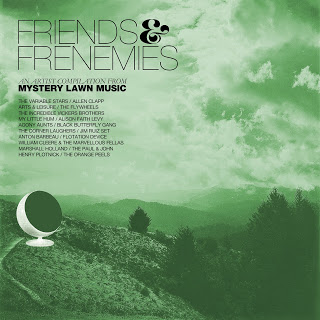 This is in no way a Best Of List, since I was only able to listen to a fraction of the music that came out last year. The albums are shown in order of preference. I’d like to thank all the artists, press agents, and labels that sent me music to review. I sincerely apologize that due to time constraints, I wasn’t always able to respond to messages I received. I wish everyone the best of luck in their creative endeavors. Note: Some of these albums were actually released in 2015.
So, here is the second half of this year’s list. The numbers in parenthesis are the date the review was posted on Broken Hearted Toy.

21. Various - Friends And Frenemies: An Artist Compilation The first collection from the Mystery Lawn Music label featured songs by The Orange Peels and similar California acts. (12/28)

23. Mimi Betinis - Music Sounds The first of two 2016 albums from the Pezband founder found him exploring different types of music while keeping the emphasis on strong melodies.(8/16)

24. Javier Escovedo - Kicked Out Of Eden (1/12) Second solo effort from the leader of 1970s punk band The Zeros had loads of energy and he was backed by a first-rate band.

28. Rob Clarke And The Wooltones - Are You Wooltoned? New album gathered fun psych-rock and 1960-inspired songs from previous releases by the Liverpool-based trio. (11/30)

29. Mimi Betinis - Basement Tapes Vo. 1 The Pezband vocalist didn’t use much more than an acoustic guitar on these catchy songs, and opted for a lush arrangement on others. (9/15)

30. The Monos - Live ’78 Performance at the North East London Polytechnic club was a low-fi but worthwhile trip back to the dawn of the punk and power pop genres. (11/24)

31. Jeremy Porter And The Tucos - Above The Sweet Tea Jeremy Porter’s tales of dive bars and the bands and lonely people who frequent them were set to catchy melodies. (6/28)

34. The Unswept - Fake It England-to-Chicago transplants Charlie, Ryan, and Liz O’Brien crafted another collection of songs reminiscent of Carnaby Street circa 1965. (1/4/17)

37. Paul Carrack - Soul Shadows The voice on Squeeze’s “Tempted” and singer for Mike And The Mechanics was still at the top of his game as he explored a variety of genres. (3/2)

41. The Neverly Brothers - Magical History Tour Double CD followed the format of the band’s live show, with covers of songs by rock and roll pioneers from the 1950s and ‘60s. (3/17)

43. Christopher David - The Houdini Tapes Mostly acoustic and low-key solo from Magatha Trysty singer-guitarist was far afield from his work with that band but still engaging. (2/10)