The Flat Five - It’s A World Of Love And Hope 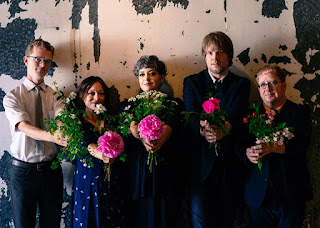 All the members of The Flat Five have busy schedules in the music scene, which might explain why this full-length debut has been a long time coming. Kelly Hogan, Nora O’Connor, Scott Ligon, Casey McDonough, and Alex Hall formed the band as a means to utilize their impressive harmonies in Chicago area clubs, and have steadily built a loyal following. While initially known for eclectic cover versions, they found a kindred soul in Scott Ligon’s songwriter brother Chris. All 12 tracks on It’s A World Of Love And Hope are his compositions.

Those original tunes sound like that they could have sprung up decades ago, thanks to vintage vocal interplay and musical arrangements. And like some of the well-known artists of those long-gone eras, The Flat Five relish adding a certain amount of silliness. Still, it’s surprising (and funny) to encounter gorgeously delivered lines like, “Rub a dub a dub, you dirty thing” and “I know it was wrong to hit your mother but she had it coming all the way.” On “Buglight,” which sounds at least partly inspired by The Mills Brothers’ “Ragmop,” there’s the line, “My girl don’t look like Madonna, but she gets hot when she turns on a buglight.”

Occasionally, the humor and quick rhymes feel forced, as on “Blue Kazoo,” but that’s easy to overlook when the album offers treats like the jazzy and sensual “You’re Still Joe” and the off-kilter but enticing techno pop of “Almond Grove.” The easy-going “Florida” taps into The Andrews Sisters, but fans of the more recent sibling act The Roches would also be impressed. The Flat Five are at their best on “This Is Your Night,” an irresistible samba that recalls “Mas Que Nada” by Sergio Mendes and Brazil 66.
Posted by Terry Flamm at 3:53 PM