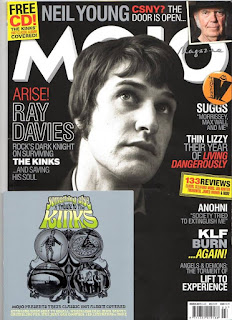 Ray Davies’ new album Americana, his first release in 10 years, is due out April 21 and is available for preorder on Amazon. The single “Poetry,” a catchy tune with jangling guitars, can already be downloaded for $1.29. According to the official Ray Davies Facebook page, the new issue of MOJO magazine will have an in-depth interview with him, along with a free Kinks tribute CD.

It was touching to see the numerous tributes to Mary Tyler Moore in the daily papers and across social media following the news of her death at age 80. Moore not only gave television two of its most endearing characters in Laura Petrie on The Dick Van Dyke Show and Mary Richards on The Mary Tyler Moore show, she was actively involved in raising funds to fight diabetes and also supported the humane treatment of animals.

Chicago-based alt-rock band whitewolfsonicprincess is hosting its first Rock ’N' Roll Circus event this Sunday, January 29 at The Red Line Tap. Other acts on this eclectic showcase include The Dark Room Men, KC Cronis, and The Hens. Carla Hayden and James Moeller of whitewolfsonicprincess plan to stage The Rock ’N’ Roll Circus (which takes its name from a famous happening led by The Rolling Stones in 1968) on a semi-regular basis.

Steep Theatre Company’s production of the Mike Bartlett play Earthquakes In London opened yesterday at its location on Berwyn Avenue. Directed by Jonathan Berry and featuring a cast of 15 actors, Earthquakes In London concerns a climate scientist and his three daughters coping with global destruction.

Genesis Publications, an English company whose rock and roll books are best described as magnificent (and expensive), has a new release that celebrates the iconic cover of The Beatles’ Revolver album. This is a signed, commemorative edition of the REVOLVER 50: Birth of an Icon book that artist and Beatles confidante Klaus Voorman released last year, with additional features like foiled buckram binding and a pencil drawing Genesis describes as “a unique, one-of-kind artwork.” A limited number of copies are being offered to the public, at the price of £325. I purchased the much less costly version from Voorman himself at last year’s Fest For Beatles Fans - Chicago, and it was an honor to meet him and have him sign it.

WXRT’s Lin Brehmer will mark 25 years of serving as the station’s early morning DJ with a live broadcast from Kings Bowl at MB Financial Park in Rosemont on February 3. The special guests scheduled to appear are being kept under wraps, but it’s a safe bet our current chief executive won’t be among them. Brehmer continues to be, to use his catchphrase, our best friend in the whole world, and his philosophy “It’s great to be alive!” sounds both ironic and genuine. He goes high while so many other a.m. jocks go low; with funny but introspective reflection of Lin’s Bin, and has an enjoyable rapport with news anchor Mary Dixon. Starting next week, Brehmer and Dixon will give listeners a chance to win tickets to the special broadcast.

Been there, shoveled that. Yesterday marked the 50th anniversary of the blizzard that dumped 23 inches of snow on Chicago in little over a single day. I remember earning $3 for shoveling our neighbor’s sidewalk, which I used to buy my very first album—Stop Stop Stop by The Hollies. Playwright Jon Steinhagen taps into other memories for his play Blizzard ’67, which is currently running at the 16th Street Theater in Berwyn through mid-February. Steinhagen and director Ann Filmer were recently interviewed by Rick Kogan for an article in the Chicago Tribune, and they described the play as being about four office workers who make an ill-fated decision to carpool home in the teeth of inclement weather.

Maybe Jughead did it. Back when I was in eighth grade, I would often chill out with a bottle of RC cola while listening to Ron Riley on WLS and reading Archie comic books. Archie and his his friends have already been reimagined in a series of graphic novels, and now they’ll have a series called Riverdale on the CW channel. The ambience is a bit darker now, with the gang trying to solve a murder.