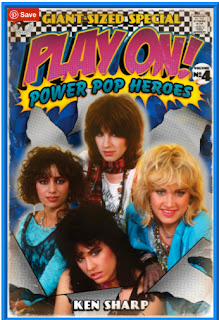 Congratulations to The Bangles on being chosen for the cover of Power Pop Heroes Vol. No. 4, the latest edition in noted rock critic Ken Sharp’s impressive series of books on the genre. This time out, Sharp casts a spotlight on The dB’s, Tommy Keene, Let’s Active, The Go-Go’s, The Three O’Clock, The Smithereens, Matthew Sweet, The Hoodoo Gurus, and others. Power Pop Heroes Volume No. 4 is available for pre-order from the Pop Geek Heaven website.

U2 has added a second Chicago date for The Joshua Tree Tour 2017. The iconic Irish band will play June 3 and 4 at Soldier Field and on the following weekend, will be one of the headliners at the Bonnaroo Music And Arts Festival in Manchester, TN. Other acts coming to Bonnaroo include Red Hot Chili Peppers, The Weekend, Tegan and Sara, Lorde, and Cage The Elephant.

The Chicago International Puppet Festival has returned to Chicago and will run at various venues around town through next Sunday, January 29. The Chicago Museum of Contemporary Art, Looking Glass Theatre, Links Hall, The Neo-Futurists, and The Center for Community Arts Partnerships at Columbia College are among the local organizations involved. I can’t see the word puppets without immediately thinking of Desiree Burcum of the Famous In The Future comedy group. During the years I was with FIF, and since I left, she’s created a number of imaginative puppets for skits and songs.

The Gene Siskel Film Center is presenting an Oscar viewing party titled Hollywood On State: Where You’re The Star! on Sunday, February 26. A live Academy Awards telecast at 7:30 will be preceded by an hour-long session of Red Carpet, Food and Libations. General Admission is $100, and there’s also a $200 VIP Lounge option.

Victoria, Victoria, Victoria, Victoria. Ray Davies and The Kinks paid tribute to her in song, and now a one-time companion of The Doctor is portraying Queen Victoria in the early days of her reign. Jenna Coleman, who exuded charm and determination as Clara Oswald on Doctor Who, takes on the lead role in the current PBS Masterpiece series Victoria.

The citizens of Aurora, IL will be having a schwinging time when Party On! 25 Years Of Wayne’s World kicks off on February 3 with a poster contest at the If These Walls Could Talk gallery. According to reporter David Sharos in The Beacon News (and picked up by the Chicago Tribune), the month-long celebration honoring the Mike Myers and Dana Carvey flick will also include a major event in Aurora on the 4th of July involving a quest to set a world record for the largest crowd headbanging to Queen’s “Bohemian Rhapsody.” Which hopefully won’t result in numerous cases of whiplash. Way!

Ronnie Spector from The Ronettes; solo artist and former member of The Runaways Lita Ford; Garbage vocalist Shirley Manson; and jazz bassist Esperanza Spalding were among the honorees at the fifth annual She Rocks Awards held at the Anaheim Hilton this past Friday night. According to Kelli Skye Fadroski in The Orange County Register, the event was co-hosted by Daisy Rock Girl Guitars founder Tish Ciravolo and Fox 11 news anchor Christine Devine, and featured a rendition of Led Zeppelin’s “Lemon Song” performed by the all-female tribute band Lez Zeppelin.
Posted by Terry Flamm at 9:33 PM