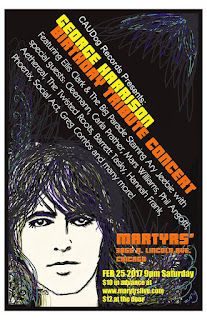 In the event of something happening tonight. Sorry for the late notice, but I only just saw the ad in this weeks’s Reader, and now it’s sold out. Tributosaurus, the Chicago-based collective that meticulously recreates famous music artists, will become The Bee Gees tonight at Martyrs’ on Lincoln Avenue. Hopefully, they’ll cover a lot of vintage brothers Gibb stuff and not just the Saturday Night Fever era hits. The show starts at 8:00 p.m.

Give me hope, help me cope, give me Chicago-area bands celebrating George Harrison’s life. Plenty of advance notice on this one: Ellis Clark and The Big Parade featuring Ary Paloma Jeebie will be hosting a a George Harrison Birthday Tribute Concert on February 25 at Martyrs’. Special guests so far include Mars Williams from The Psychedelic Furs, Carla Prather from Poi Dog Pondering, Phil Angotti, The Handcuffs, Aethereal, Social Act, The Polkaholics and Gunnar Cleermann all the way from Denmark. Admission is $10 in advance, $12 at the door.

I’ve gotta get a message to you. The Bangles are promising to provide plenty of information to fans who sign up for the band’s new mailing list. Details and a link can be found on The Bangles Facebook page.

Yes, Sir! Congratulations to Ray Davies of The Kinks on receiving knighthood from Queen Elizabeth as part of her annual New Year Honors list. According to a report by Daniel Kreps on Rolling Stone online, Davies was rewarded for his service to the arts.

The Telepaths, the garage rock outfit that includes James Moeller from whitewolfsonicprincess will be performing tomorrow night at Phyllis’ Musical Inn on Division. Steve Gilpin And Crown Vic Royal are also on the bill. The music starts at 9:45 p.m.

Best wishes to veteran news anchor Kathy Voltmer, who is is leaving her position at WDRV The Drive to explore new adventures. I’m most familiar with Voltmer from her days of working with morning air personality Lin Brehmer on WXRT, but she has many devoted followers from her time at The Drive and other Chicago radio outlets.

Tickets are now on sale for The Wild Honey Orchestra Plays The Band’s Music From Big Pink, The Band And Beyond  at Alex Theatre in Glendale, CA on March 25. The event’s Facebook page promises very special guests will be announced soon and if past Wild Honey shows are any indication, expect a lot of well-known musicians from the California area.

Go Time! has a record release show coming up on January 28 at The Uptown Lounge. Mama YaYa is the scheduled opened act. I’m currently in the process of listening to the new Go Time! album VI for a review on Broken Hearted Toy, and it’s an 18-track collection of hard-edged pop led by lead vocalist Scott Niekelski’s distinct delivery.

Have you seen you wife, Mr. J? There was an unexpected reference to Mick Jagger’s former spouse Bianca in a recent Chicago Sun-Times article on Bob Herguth’s new book Genuflections: Famous Folks Talk About Growing Up Catholic. The Bianca Jagger Human Rights Foundation is devoted to defending human rights and ending violence toward women and girls. Little known fact: Herguth once did a profile on me for the Sun-Times back in the days when I was a matchbook proofreader and performed with the Famous In The Future comedy group.

There’s an all-ages four-band showcase taking place next Saturday, January 14 from 3:00 to 8 p.m. at 2200 N. California. The Hustle, a quartet that includes vocalist-bassist Ted Ansani from Material Issue and Material Reissue, is hosting the event. The other acts performing are The Ex Okays, The Safes (whose CDs have been favorably reviewed her on BHT), and The Differents. Admission is $8.

Sons Of The Silent Age, the Chicago-based David Bowie tribute band, will be performing Bowie’s Low album and other songs next Sunday, January 15 at Metro. The event is part of the 2017 Tomorrow Never Knows festival.

Steep Theatre Company will perform Earthquakes In London, Mike Bartlett’s play about a climate scientist and his three daughters coping with global destruction, at its location on Berwyn Avenue starting January 26. Jonathan Berry directs a cast of 15 actors.

Peter Asher: A Musical Memoir Of ‘60s and Beyond takes place next Sunday, January 15 at The Old Town School Of Folk Music on Chicago’s north side.

I still plan to do my annual Big Ideas post, in which I solicit contributions and come up with my own suggestions for what creative types hope to or should accomplish in the coming year. Anyone who’d like to participate can send me a short message with your plan via brokenheartedly@gmail.com. Since I’m so late in starting this, I’ll be accepting contributions through the end of January.
Posted by Terry Flamm at 10:07 PM