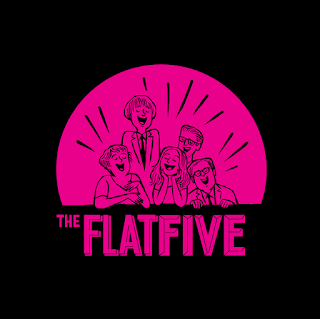 An eclectic triple bill of rock will be getting an early start this Friday night at Reggie’s Music Joint in the south Loop on State Street. The three acts involved are the hard rock quartet Moontower, The Handcuffs, the coed indie band led by singer-guitarist Chloe F. Orwell and drummer Brad Elvis; and Statues Of Liberty, a 10-piece band that describes its music as full-on, full tilt boogie. I’ve covered The Handcuffs’ albums and live shows several times here on Broken Hearted Toy. Showtime is 8:30.

That’s also the same night The Flat Five has a sold out show at City Winery. Regarded as an all-star band due to the extensive experience members Kelly Hogan, Nora O’Connor, Scott Ligon, Casey McDonough, and Alex Hall have on the Chicago and national scene, The Flat Five puts a major emphasis on harmony vocals while creating original tunes that sound like that they could have sprung up decades ago. They’ve been getting a lot of press and rave reviews for their long-awaited debut effort It’s A World Of Love And Hope. For the City Winery gig, The Flat Five will be joined by Chicago’s Total Pro Horns.
Posted by Terry Flamm at 10:52 PM