The Unswept - Fake It 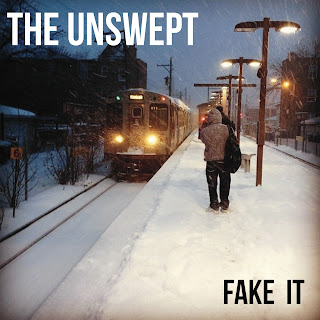 The Unswept, a trio that comprises cousins Charlie and Ryan O’Brien, along with Liz O’Brien, who might also be a cousin, is probably best known in Chicago for its appearances at International Pop Overthrow. Vocalists-guitarists Charlie and Ryan moved from Sheffield, England to the Logan Square neighborhood in 2013, although their music is more reminiscent of Carnaby Street circa 1965. Their new four-song EP Fake It (which also includes four mono versions) follows in the steps of the band’s previous two off-kilter and infectious releases.

The title track borrows the riff from The Beatles’ “I Feel Fine” while describing a working stiff who can only survive his nine-to-five existence by slapping a phony smile on his face. As on all four tracks, bassist-singer Liz O’Brien adds some fetching backup vocals. Lustful intentions are couched in the light, melodic arrangement and cuddly lyrics of “The Boy Who Wants To Wake You Up.”

On the fast and catchy “SALLY,” a guy compares his girlfriend to a supermodel, not because of her looks, but because of her privileged attitude. “She Just Knows It’s Over” is the strongest cut on Fake It, as the band employs a power pop arrangement while delving into the deeper emotions of woman leaving her husband and kids. “It’s hard to believe that all she needs will fit in the boxes she’ll take when she leaves.”
Posted by Terry Flamm at 11:00 PM