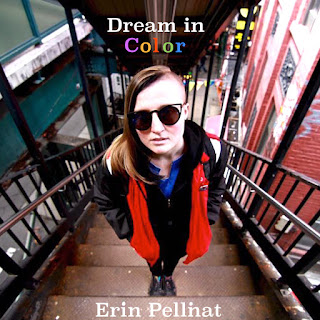 Brooklyn-based singer Erin Pellnat has been involved in a variety of projects, including the indie rock band Caretaker. Dream In Color, released late last year, is her collaboration with Christopher Pellnat. He composed the songs, and she successfully chooses a different vocal approach for each of them.

“Blue Skies And Happiness” draws from the Irving Berlin classic “Blue Skies” but heads in a more somber direction. After discovering she’ll never find the happiness her lover promised, a woman decides to say farewell. Erin Pellnat creates a torch song ambience with her vocals, and also underscores the humor in lines like, “Everyone told me you’re a prince/The thought of you now just make me wince.”

The Pellnats (not sure how they’re related) give “Stay” the feel of a traditional folk song that’s been spooking people for centuries. On the surface, it’s a simple invitation from a lonely woman to come in out of the cold, but Christopher’s lines—and Erin’s delivery of them—suggest something more sinister is going on. “I’m the daughter of my mother and at her behest I’ll kiss your tears away,” she explains, and adds that the guest can remain with her in the house until the end of time.

The more optimistic “Dream In Color” is an acoustic-based call to enjoy the world in all its splendor, and suggests, “Love true, truer than you’re used to.” “Forever Kisses,” set to a chic European arrangement, is another tribute to the staying power of love, even when things don’t work as planned.
Posted by Terry Flamm at 10:45 PM