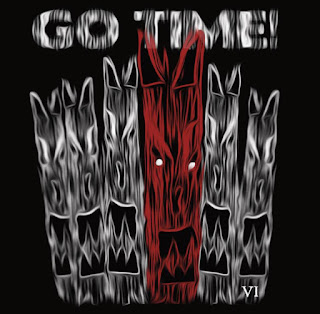 Niekelski wrote all the material, and his outlook is bleak whether he’s describing crumbling relationships or trying to make sense of the everyday work world. “We are sinking fast,” he notes on the edgy but melodic “On The Brink.” Elsewhere, there are lines like, “It all turns to dust,” “The prognosis is rotten,” and “You became a slave.”

As for the music, Niekelski, working with bandmates drummer Steve Grzenia. bassist Mark Market, and guitarist Paul Schmidt, never seems to run out of ideas. “No More Tomorrow” kicks off with Marketti’s slinky bass playing before the band breaks into a full gallop, and there’s a dash of Latin flavor on “Old Habits Die Hard.” The high-speed “Way Out” bristles with a punk intensity that’s reminiscent of fellow Chicagoans The Effigies, and Go Time! adroitly weaves acoustic guitar into the electric arrangements of “Broken” and “Crash Land.”

Go Time! has a record release show for IV coming up in January 28 at the Uptown Lounge.
Posted by Terry Flamm at 10:01 PM