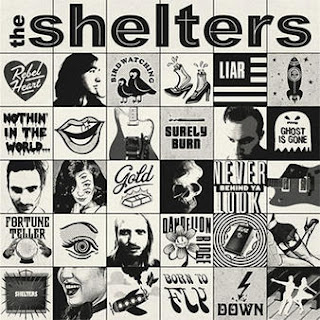 The Shelters’ journey through this self-titled album is so sure-footed, it’s hard to believe it’s their full-length debut and they’ve only been around a few years. Having Tom Petty co-produce surely helped, but the credit for the depth and quality of material goes entirely to this Los Angeles-based quartet. Two of the tracks have already been chosen as “Coolest Song Of The Week” by Little Steven Van Zandt on his Underground Garage radio program, and several more are qualified to follow.

It’s hard to pin a label on The Shelters since they dabble in so many genres, but suffice to say if it’s cool and guitar-driven music, you’ll probably find it here. The jangling intro to “Rebel Heart” is pure Beatles, but the song also has a glam rock allure. “Fortune Teller,” embellished with harmony vocals and harmonica playing, could have been an early Hollies hit single. “Never Look Behind Ya” and “Down” are gritty, blues rock songs, and the acoustic “Nothing In This World Can Stop Me Worrying ‘Bout That Girl” falls between Jack White and something from Led Zeppelin III.

Throughout the album, hard-edged tunes like “Birdwatching” and “Surely Burn” are balanced with the dream-like atmosphere of “Born To Fly” or the easy-going prog rock of “Dandelion Ridge.” The mysterious experiences described in “Gold” evoke vintage Fleetwood Mac, while “The Ghost Is Gone” drifts through some interesting tempo changes. “Liar,” a song about a relationship riddled with deceit, combines echo-laden vocals and energetic guitar playing for a classic rock feel.
Posted by Terry Flamm at 9:58 PM