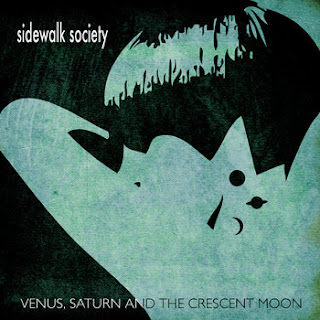 Anyone who’s been impressed with the cover versions Sidewalk Society has recorded for the vinyl-only UK label Fruits de Mer (most recently The Action and David Bowie songs) should check out the California-based trio’s 2012 debut Venus, Saturn and the Crescent Moon. That same 1960s vibe runs through Sidewalk Society’s original compositions, and with drummer Jerry Buszek, guitarist Danny Lawrence, and bassist Dan West all singing, the vocals are consistently enticing and adventurous. A lot of the catchy yet complex arrangements feature instrumental passages.

That extended time on the psychedelic “Abbey Chatsworth” allows Lawrence to cut loose with some unbridled guitar playing. On “Nice Boys,” a caustic look at a woman who seems to enjoy the challenge of dating obnoxious losers, the band combines funky guitars with a string arrangement. The well-crafted lyrics sometimes take aim at careless lovers, as in the Beatles-influenced “If Only,” but have more of a political and social feel on “Silent Echo” and “Golden Parachute.” The hard-hitting “Sign Of Evolution” has lines like, “I guess all I need is someone to believe in, but it ain’t you.”

Sidewalk Society goes for a mysterious and psychedelic approach on the mid-tempo “Miss Understood,” which describes a woman who, “comes to me from the dead, to give me an answer.” “I Let Her Get Away” has a vintage Motown town, as well as one if those extended instrumental passages. The title track slips into the early 1970s, with a glam rock groove that recalls the party ambience of T-Rex.
Posted by Terry Flamm at 10:54 PM