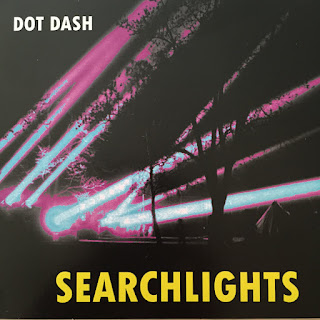 Over the course of four previous albums, Dot Dash has shown an expertise for not only drawing inspiration from the cutting-edge rock of the late 1970s and ‘80s, but also making that sound their own. They offered authentic punk on their debut Spark>Flame>Ember before moving on to a more guitar-driven approach reminiscent of Translator and Red Rockers on their later efforts. It’s not as immediately evident what the Washington, D.C.-based band is going for on the brand new Searchlights, but it’s another adventurous, engaging effort.

“Dance On Broken Glass” could easily be taken as a hard rock song, based on the furious guitar playing of Steve Hansgen and vocalist Terry Banks. They also cut loose on the high-speed “Lonely Serenade” and the epic-length “Fading Out.” And yet, there’s “Dumb Entertainment,” a stark blast of sneering punk defiance, and it feels as though the ghost of Joe Strummer is drifting through “10,000 Days,” “The Infinite,” and the more nuanced but still edgy title track.

Dot Dash keeps the emphasis on strong melodies and biting lyrics while exploring new territory. “Sooner or later, every caped crusader finds a villain he can’t beat,” Banks sings on “Crumbs,” another song that taps into The Clash. His vocal inflections add a subtle touch to the more introspective “Summer Lights,” and he growls through the goofy party rock of “Daddy Long Legs.”
Posted by Terry Flamm at 9:42 PM