1966, A Flashback Auction, and Revolver Tributes 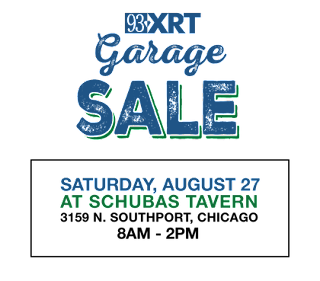 WXRT air personality Wendy Rice will be doing a live broadcast of her weekly show Saturday Morning Flashback this Saturday from 8:00 a.m. to 12:00 p.m at Scubas Tavern. The event is being combined with the progressive rock station’s first Garage Sale, and people willing to get up early on their day off will be able to bid on some interesting stuff. The items include autographed guitars and posters; WXRT CD compilations that are no longer available anywhere else, 2017 Lollapalooza passes, assorted rock and roll memorabilia, and a chance to hang out with one of the dee jays.

The Kickback, a Chicago area band that’s been getting a lot of attention and has released its debut album Sorry All Over The Place, will perform at Schubas at 1:00 p.m.. Their show should be a good way to wrap up this rare opportunity to see Rice working Flashback in person. All proceeds from WXRT’s Garage Sale will go to The Salvation Army's Let The Music Begin program, which helps bring music education to Chicago area kids and teens.

Saturday Morning Flashback, which has been a popular feature on WXRT for several years now, celebrates a different year for each show via music, trivia, news stories, and brief reports recorded by others members of the air staff. It’s well researched, fun, and never fails to bring back a lot of memories. My only complaint is that it’s time for Flashback to go beyond its current range to include at a few years from the current millennium, as well as going back to 1966.

And to that point, The Whatfour, a local band comprising Phil Angotti, Casey McDonough, Scott Ligon, Joe Camarillo and John San Juan, will perform The Beatles’ Revolver album in its entirety next Friday (September 2) at FitzGerald’s in Berwyn. Angotti has become quite adept at honoring 1960s acts, and performed at the recent Fest For Beatles Fans - Chicago. This year’s Fest also featured the Liverpool Beatles tribute band covering Revolver. The landmark album was released 50 years ago.

The Chicago Tribune recently carried a fascinating piece by Los Angeles Times writer Randy Lewis about 1966 titled Rock ’N’ Roll’s Most Revolutionary Year. In it, Lewis mentions Revolver, Bob Dylan’s Blonde On Blonde, Love’s Love, The Beach Boys’ Pet Sounds, The Rolling Stones’ Aftermath, and Face To Face by The Kinks. I would add For Certain Because by The Hollies. So, there’s plenty of material if 1966 is ever added to the Saturday Morning Flashback roster.
Posted by Terry Flamm at 10:53 PM