By The Time We Got To The Den Theatre 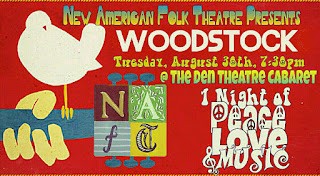 When Mary-Arrchie Theatre staged The Last Abbie at The Den Theatre a little over a week ago, it marked the end of a 28-year tradition of celebrating the communal and unbridled spirit of the original Woodstock via the annual Abbie Hoffman Died For Our Sins festival. If you missed that event, or saw it and want to keep your hippie groove going, head back to The Den Theatre tomorrow (Tuesday) night. That’s when New American Folk Theatre is presenting its fundraiser The Woodstock Cabaret.

New American Folk Theatre (NAFT) has been on the Chicago theatre scene since 2011, having morphed from southside children’s theatre group. The Woodstock Cabaret, billed as “1 Night of Peace, Love and Music,” will offer a number of musicians performing songs by Janis Joplin, Crosby, Stills and Nash, Jimi Hendrix, Melanie, The Band, and other acts that gathered on Max Yasgur’s farm back in 1969. Tickets are pay-what-you-can, with a suggested donation of $10. The show kicks off at 7:30 p.m. at The Den Theatre, which is located at 1329 N. Milwaukee Avenue in Chicago.
Posted by Terry Flamm at 10:33 PM