So Long, And Thanks For All The Freaks 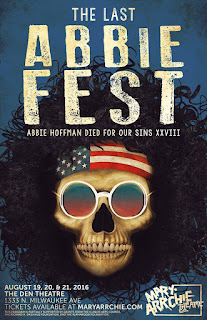 Mary-Arrchie Theatre was a storefront ensemble that exuded a counter-culture vibe throughout three decades of critically hailed productions. That attitude was never more evident than during its annual Abbie Hoffman Died For Our Sins festival, which first sprang from the unfettered mind of Artistic Director Rich Cotovsky in 1989 and has been a tradition ever since. The company closed earlier this year, but will offer one more hippie hurrah as The Last Abbie Fest runs this Friday through Sunday.

The official kickoff will be a rally in Daley Plaza at 2:00 PM on Friday afternoon. As always, the event will bring together veteran and fledgling groups from across Chicago’s vibrant theatre community. Since the building that Mary-Arrchie called home—at the corner of Broadway and Sheridan Road—has been demolished, Abbie Fest will be held at The Den Theatre on Milwaukee Avenue. Cotovsky will resurrect his impersonation of Yippie leader Abbie Hoffman as he oversees a chaotic and virtually nonstop barrage of drama, comedy, music, and performance art that he jokingly concedes he shouldn’t be able to pull off.

But somehow he always does. Mary-Arrchie will perform Arlene Cook’s Gas Mask 101 and Matt Borczon’s Wild Dogs, both of which are annual showcases for the theatre company’s hard-edged approach. Mary-Arrchie ensemble member/director Carlo Garcia will host an Abbie-Okie Karaoke and Cotovsky will rage through a Bitch With Rich session in the wee hours of the morning.

I performed at Abbie Fest for 20 years with the Famous In The Future comedy group, and I’ve continued to go every year since. The participants develop a sense of community among themselves, as well as with the audience members who have become Abbie Fest fanatics. This year, Famous In The Future, which has carried on nicely without me, will present the aptly titled revue of skits and songs The End Of Abbie Road at 5:50 p.m. on Saturday. The always fascinating Black Forest will perform their latest original avant garde piece Shimmerings that same afternoon.

The Closing Ceremonies on Sunday, which feature Cotovsky as Abbie Hoffman railing against the evils of right wing society before being carried off by pallbearers, will be especially poignant. This time, Abbie Fest won't be coming back.

The full schedule is available on the Mary-Arrchie website.
Posted by Terry Flamm at 10:07 PM