The (Class) Act You’ve Known For All These Years 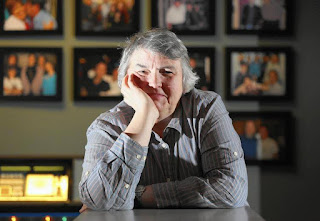 Photo from Terri Hemmert's Facebook page.
You could almost hear a collective sigh of relief among Chicago area Beatles fans this morning as they tuned in to Breakfast With The Beatles on WXRT and found host Terri Hemmert has returned to her regular schedule. She had been out of commission due to back surgery but recorded a number of editions of the two-hour weekly program in advance so it wouldn’t have to go on hiatus. Today’s Breakfast With The Beatles was her first new one since her operation.

The good news extends to the 40th Annual Fest For Beatles Fans - Chicago at the Hyatt Regency - O’Hare in Rosemont next weekend. Hemmert might need a wheelchair to get around, but she does intend to serve as the event’s Master Of Ceremonies for her 39th consecutive year. This likely includes chatting with the celebrity guests and conducting The Battle Of The Beatles Bands contest.

As an interviewer, her calling card is combining the enthusiasm of a fan with the professional approach of an air personality who’s earned a place in the National Radio Hall Of Fame. Hemmert joked on her show today that she would host The Fest even if she had to do it on a stretcher. That’s probably true but let’s hope it never comes to that.

Terri Hemmert also has also returned to the 10a.m. to 1p.m. weekday shift on WXRT.
Posted by Terry Flamm at 10:09 PM