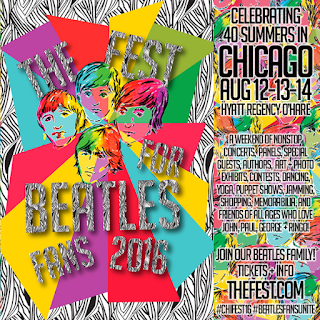 Fest For Beatles Fans - Chicago runs this Friday through Sunday. Founded by Mark and Carol Lapidos back in the late 1970s, the annual celebration brings a wide range of fans together at the Hyatt Regency O’Hare in Rosemont to relive Beatlemania via concerts, celebrity interviews; sing-along sessions; trivia contests; art exhibits; video presentations, and more. There are also unique Beatles and rock items for sale in the marketplace.

The 2016 lineup of celebrity guests includes musicians; authors (including Bruce Spizer and Robert Rodriguez); artist Eric Cash; and Louise Harrison—George’s sister. Klaus Voorman, the artist/musician who inspired The Beatles in their earliest days, will be on hand for a premiere and exhibition of a graphic novel based on how he designed the Revolver album cover. Peter Asher and Billy J. Kramer, contemporaries of The Beatles (and recipients of some of their compositions) will be there, along with Badfinger’s lead guitarist Joey Molland.

Guitarist Albert Lee, who performed with George Harrison and Eric Clapton, is making his Fest For Beatles Fans - Chicago debut. Mark Hudson, a musician and producer who has worked with Ringo Starr and Cher, is a longtime Fest participant with an unbridled sense humor and an extensive knowledge of rock and roll.

Once again, there will be lots of live music, including Peter Asher and Albert Lee’s In Story And Song Part 1 on Saturday and Part 2 on Sunday in the Ballroom. The Apple Jam Stage, which made an impressive debut last year, offers performances on a small stage all weekend. I would particularly recommend catching Phil Angotti, who has done several 1960s-related shows around town; Jay Goeppner, who often performs with Angotti and leads the tribute band Backdated; and Pat DiNizio, lead vocalist-guitarist with The Smithereens. The superb Beatles tribute band Liverpool performs in the Ballroom each night of The Fest, and on Saturday night, they’ll cover songs from Revolver and then jam with Kramer, Molland, Hudson, Lee, and DiNizio. The Weeklings, a quartet comprised of Glen Burtnik and John Merjave from Liverpool, plus Bob Burger and Dave Anthony, will perform on Saturday afternoon.

There will be designated signing times for most of the guests, and many will be interviewed by master of ceremonies Terri Hemmert, whose Breakfast With The Beatles show airs on WXRT in Chicago every Sunday morning. (I posted a piece about Hemmert this past Sunday.)

Tickets are $52 for Friday, $78 for Saturday or Sunday, and $190 for the entire weekend. Various two-day combinations are also available. Check Fest For Beatles Fans - Chicago online for a list of the celebrity guests and an extensive rundown on all the activities (too many to list here) going on all weekend.
Posted by Terry Flamm at 10:38 PM