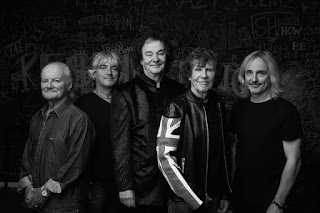 The Zombies are coming to The Arcada in St. Charles.

"The grass has grown much taller now, overrunning everything. Oh, what have I done?"

- "Crusader" by The Hollies.

So another week has gone by with hardly a post here on Broken Hearted Toy, due to my having double-duty proofreading assignments. As I've mentioned before, I'm not complaining (especially after some of the slow periods I've hit in recent years) but it does leave me feeling guilty about not meeting the self-imposed deadlines for this blog. And I sincerely apologize to those who've sent me emails regarding their new albums. I could never keep up with all of those releases and some, despite their merit, just don't fit the BHT format. But I'm hoping to at least start downloading a few for reviews in the near future.

The man who wrote the lyric quoted above (and the exquisite melody that went with it) is coming to Chicago for two days in May. An Evening With Graham Nash, the singer-songwriter's upcoming tour in support of his new This Path Tonight album, will stop in Chicago on May 11 and 12 at City Winery. Tickets go on sale next Wednesday, although fans who've signed up to get Nash's emails can order them on Monday. If you become a City Winery Vinofile, you can purchase Nash tickets on Tuesday. Needless to say, I'll be writing more about these shows in the coming months.

Tickets went on sale yesterday for The Zombies show on May 29 at The Arcada in St. Charles. Founding members Colin Blunstone and Rod Argent, along with returning members Hugh Grundy and Chris White, will perform classic hits like "Tell Her No," "She's Not There," and "Time Of The Season," along with tracks from the recently released Still Got That Hunger album.

Cheap Trick fans can already start counting their 2016 blessings now that the band has released a digital copy of the song "No Direction Home" as a preview of its upcoming new album. Bang Zoom Crazy...Hello is being released on April 1, just seven days before Cheap Trick receives a long overdue induction into the Rock And Roll Hall Of Fame. The guitar-driven and defiant "No Direction Home," with its catchy arrangement and Robin Zander's distinctive vocals, can be downloaded for free when you follow the link from the Chicagoist website. A big thank you to Chicago power pop musician and Cheap Trick fan Brent Seatter for posting about this on his Facebook page.

Mary-Arrchie Theatre's final production, a staging of David Mamet's American Buffalo, opened yesterday and will run through March 6. Congratulations to Mary-Arrchie's Artistic Director Rich Cotovsky on having the block outside the theatre officially named for him by the city of Chicago. As noted by the Time Out Chicago website, 46th Ward Alderman James Cappleman was instrumental in securing the honor.

The Sons Of The Silent Age will perform David Bowie's Station To Station album and several of his hits during a special tribute show on March 4 at Metro. The band, which is fronted by Chris Connelly from the Revolting Cocks and Ministry, performed at the Daley Center on the opening day of the David Bowie Is exhibition that ran at The Museum Of Contemporary Art in 2014. Other members include Matt Walker from Smashing Pumpkins and Steve Gerlach from The Bad Examples and Tomorrow The Moon. Longtime Bowie collaborator Ava Cherry will be a special guest at the Metro performance, and part of the proceeds will be donated to the University Of Chicago Medicine Comprehensive Care Center.

The Jefferson Starship concert at The Arcada in St. Charles will take place as scheduled tomorrow night, and will include a tribute to Paul Kantner, who recently passed away due to multiple organ failure. Kantner was a founding member of Jefferson Starship and its predecessor, the Rock And Roll Hall Of Fame inducted Jefferson Airplane.

Other upcoming shows at Arcada include The Bodeans on February 12, Creedence Clearwater Revisited on Febrauary 20, and comedian Steven Wright on April 9.

Peter Case, a founding member of the essential bands The Plimsouls and The Nerves, will be performing on February 13 at the Old Town School of Folk Music.

Congratulations to Arlington Heights author Kym Brunner on the upcoming publication of her comic YA novel Flip The Bird. It will be her third book. Brunner is the co-leader (with published author Cherie Colyer) of the bi-monthly writers group that I 've been going to for years.

Metric has a gig on February 12 at The House Of Blues. The band is touring in support of its latest release, Pagans In Vegas.

Scraps Vol. 2, the follow-up to Scraps' recent digital collection of songs originally recorded by Chicago band back the late 1970s and early 1980s, is now available on iTunes, Apple Music, and other streaming services. I posted a review of Scraps Vol. 1 on January 13.
Posted by Terry Flamm at 11:03 PM

Thanks for mentioning my book, Terry! Your skills at critiquing have been a valuable influence in bringing FLIP THE BIRD to publication.