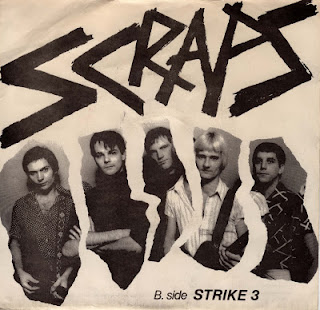 You'd have a hard time finding vinyl recordings by Scraps, a band that thrived on Chicago's club scene in the late 1970s and early 1980s. The only records I know of (and still own) are the "Strike 3"/"Gossip Gossip" seven-inch single and the "Hits!!!"/"Temporary Love" 12-inch single. Scraps also had a track on a various artists compilation put out by The Loop radio station. At least now there's Scraps Vol. 1, a digital only, 19-track album with previously unreleased studio songs and live performances. It became available late last year and grabbed a spot on my 2015 Favorite Releases list.

After all these years, I can't honestly say I remember everything on Vol. 1, although it's great to finally have a copy of "Twilight Zone," one of my favorites from back in the day. "Strike 3" and "Gossip Gossip" showcased Scraps at their best, as the quintet's energetic playing fell somewhere between punk and power pop. The fact that the harder-edged but melodic "Hits!!!" and "Temporary Love" aren't included hopefully means Scraps intend to release a Vol. 2.

A few of these songs use pretty much the same arrangement, but hearing lead singer Patrick Deane's powerful vocals and the irresistible melodies on gems like "Modern Girl," "A Boys," and "Halfway There" is like discovering a new band. "Mrs. Deane," possibly a reflection on the lead singer's own childhood, and the snide "Football Star" also show Scraps had a sense of humor. Vol. 1 is sure to bring back fond memories for those us who were always eager to catch a Scraps gig at our local clubs.