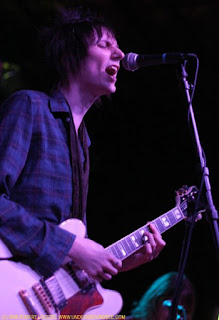 On a day when rock and roll has lost two more of its esteemed members in Glenn Frey of The Eagles and drummer Dale "Buffin" Griffin of Mott The Hoople, the Chicago music scene has also been hit hard. Kevin Junior, who fronted the lush pop group Chamber Strings, and Gary Loizzo, who started as a member of The American Breed before moving on to a career of producing albums for bands like The Kind and Styx, have passed away. I saw Kevin Junior perform at International Pop Overthrow - Chicago one year, on a night when musicians were sitting in on each other's sets. Junior, who had the look and charisma of a classic rock star, performed with at least two different lineups. A few years ago he was faced with a number of medical bills, and as often happen in these circumstances, Chicago area musicians organized a benefit to help cover the costs. There are numerous posts mourning the loss of Junior and Loizzo on Facebook today, but at least we can take comfort in knowing that through good and bad, there is a great deal of strength and compassion in our music community.

The Posies plan to release their next album Solid States this spring in partnership with the soon to be launched MyMusicEmpire. The company hopes to help musicians form a more long-lasting and interactive bond with fans in the process of creating and promoting music. Posies founding members Jon Auer and Ken Stringfellow offer a description of the company's goals on the MyMusicEmpire site.

The McCartney Years, a three-hour, 40-song Paul McCartney tribute involving several musicians and vocalists, comes to the Metropolis Performing Arts Centre in Arlington Heights this Saturday, January 23. The concept is to faithfully create a live performance exactly the way Sir Paul would have done it in the mid-1970s. Tickets are $35, $40 for stage tables. The show starts at 7:00 PM.

Graham Parker and Brinsley Schwarz, two of England's most influential musicians, will be sharing the stage together on April 22 at SPACE in Evanston. Tickets went on sale this past Saturday. Also at SPACE, the veteran Chicago area tribute band Androgynous Mustache will present A Night of Warren Zevon Songs this coming Thursday, January 21st.

It was nice to see a post from WXRT mid-morning air personality Terri Hemmert on her Facebook page this past Saturday saying her recent cancer surgery went well. She noted that she's waiting to hear if she needs further treatment but is keeping a positive attitude. Best wishes to Terri for a full recovery. In the meantime, fans can hear one-hour versions of her weekly Breakfast With The Beatles show that she recorded before her operation. They'll be running over the next few weeks until she feels well enough to go back to the full, two-hour show.
Posted by Terry Flamm at 8:32 PM